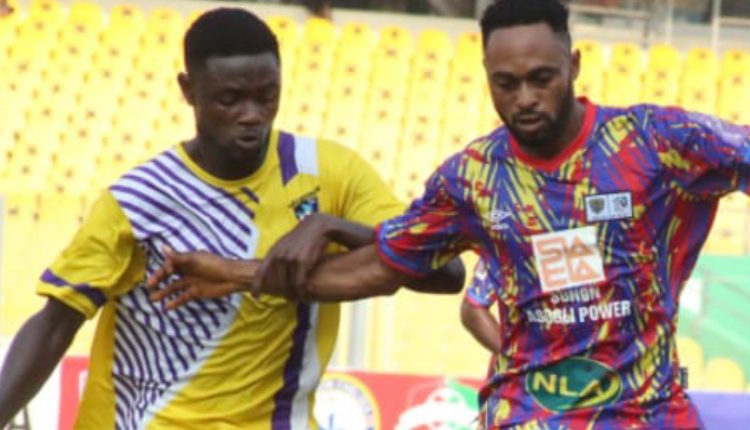 Medeama SC compounded the woes of Accra Hearts of Oak SC with an emphatic 3-1 thrashing at the Accra Sports Stadium on Sunday in the ongoing 2022 GHALCA top 6 competition.

The Yellow and Mauves commenced the match on a good note as they registered two quick goals before the the half-hour mark.

Medeama SC opened the score on the 22nd minute after a shot from Darlington Gyan Fosu deflected off Hearts of Oak centre-back Emmanuel Tsawortey into his own net.

Medeama SC could have ran riot in the first half but the individual brilliance of goalkeeper Benjamin Nana Yeboah aided Hearts of Oak from conceding more goals.

Hearts of Oak made a tactical substitution with the introduction of Marvin Owusu and Marvin Dzane as replacement for Daniel Owusu and George Tei respectively.

The first half ended in a 2-0 win for Medeama SC, a side that dominated all departments of the game.

In the second half, Medeama SC continued their impressive performance to extend the lead through Joshua Agyemang.

Former WAFA attacker Marvin Owusu announced his presence in the game after break where he kept dazzling the backline of Medeama SC but none of his effort earned them a goal before the hour-mark.

Medeama SC got the third goal through Joshua Agyemang on the 56th minute before Kudus Mohammed grabbed the consolation goal for Hearts of Oak on the 63rd minute of the game.

Hearts of Oak failed to make good use of the few chances created and the set-pieces awarded to them in the last twenty minutes of the game as it ended in a 3-1 win for Medeama.

Hearts of Oak will battle out with Berekum Chelsea in their final Group B game on Thursday.

OFFICIAL: Asante Kotoko SC Finally Gets Ogum’s Replacement [All You Need To Know About Him]