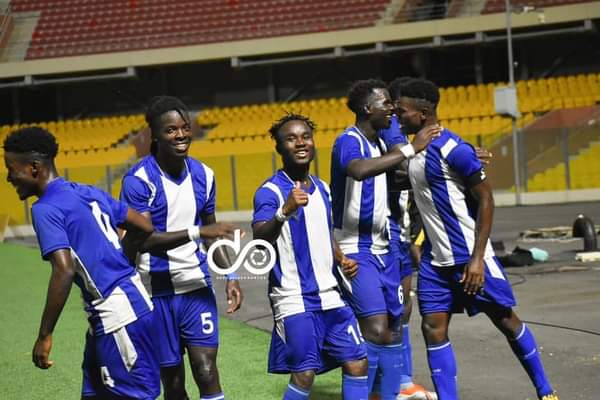 Accra Great Olympics recorded their first league win  of the season as they cruised to a 3-0 result over Money boys Legon Cities.

The brightest of the two sides has been Great Olympics with the ‘Dade’ boys coming close on two occasions after enjoying the larger portion of the possession.

Gladson nearly got the opener with a superb strike but was denied by the post.

Goalkeeper Fatua Dauda to the rescue to deny Abbey’s deflected strike on the 24th minute.

Maxwell Abbey could have opened the scoring but his low drive effort was well dealt with by Fatau Dauda.

With a minute to hit the end of the first half, Gladson Awako scored from a freekick to give Olympics a well deserved lead.

Olympics doubled their lead through Maxwell Abbey who scored from the spot kick after Samuel Abbey was fouled in the box on the 54th minute.

Legon Cities made two quick changes as Cephas Doku and Mohammed Yakubu came on for Baba Mahama and David Cudjoe.

Olympics made their first substitution as Maxwell Abbey made way for Michel Yeboah on the 71st minute.

Substitute Yakubu Mohammed with his first shot on target but goalkeeper Benjamin Asare punched it out of play.

Second substitution as Mudasiru Manaf came on for Alhassan Sunday.

With seven minutes to full time, Samuel Abbey added the third goal after going past two defenders to bend in with his left foot.

Final and third change for Olympics as Ebenezer Sekyere was introduced for injured Eric Osei .

Great Olympics held on to the three goal advantage after additional minutes to pick up their first win.