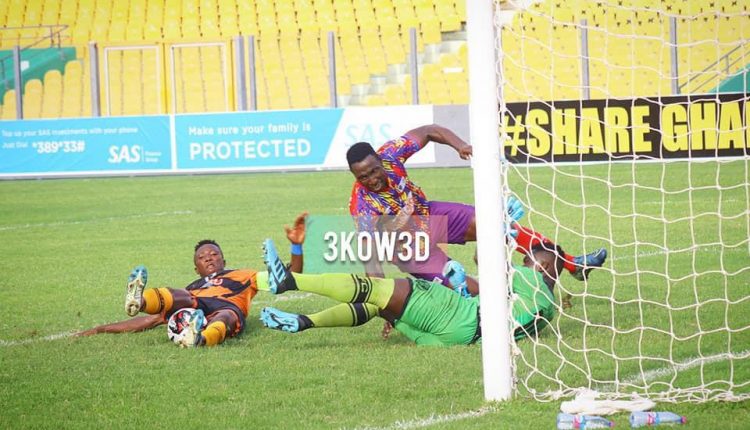 Hearts of Oak played out an interesting 0-0 draw at the Accra Sports stadium against Legon Cities on Sunday in the first game of their title defence.

The champions created a lot of chances and looked likely to get the open goal in the early minutes in the first half with Salifu Ibrahim forcing the Royals goalkeeper Eric Ofori Antwi into two quick superb saves.

Samuel Boadu and his lads continued to put more pressure on Maxwell Konadu’s rejuvenated side but experienced defender Joseph Adjei and goalkeeper Ofori Antwi were always attentive to stop the havoc from the Phobians.

Legon Cities also had their chances to punish the home side but goalkeeper Richard Attah came to their rescue before the first half ended 0-0.

In the second half that saw many chances for both teams, the home side came closest again to scoring but Salifu’s freekick hit the cross bar, while Legon cities also missed goal scoring opportunities in added time of the game.

Hearts bulky striker Kofi Kordzi was dominated in the air play with high intelligence and physical ability by Joseph Adjei who won almost all the aerial duels before the legon cities defender saw first yellow card of the game.

Joseph Adjei was very athletic and had a phenomenal marking for the Phobian attackers as his side kept a clean sheet in their first game of the 2021/22 GPL season that ended in a 0-0 stalemate.

Ghana Premier League: Champions Hearts of Oak are a target of every clubs – Samuel Boadu