Ghana Premier League: Champions Hearts of Oak are a target of every clubs – Samuel Boadu 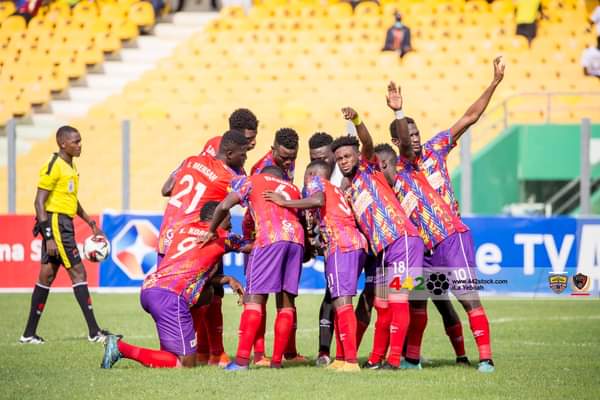 Hearts of Oak head coach – Samuel Boadu has said that his team has become the object of target for the other seventeen clubs playing in the 2021/22 Ghanaian Premier League.

The Ghanaian Premier League champions were held to a goalless drawn game by Legon Cities Football Club at the Accra Sports Stadium on Sunday.

The Phobians enjoyed a greater percentage of possession and created a good number of goal scoring opportunities but the were denied on countless occasions by goalkeeper Eric Ofori Antwi who was eventually crowned man-of-the-match in the final analysis.

Meanwhile, speaking in a post match interview coach Samuel Boadu disclosed that every team that comes up against Hearts of Oak tries to go the extra mile so he was not surprise with the outcome of the game even though they dominated, but they’ll quickly put it behind them and focus on their next game.

“My boys played very well today, but like I keep saying, Hearts of Oak has become the target of all the clubs so I was not surprised at how Legon Cities played,” he said.

“For us, we take the games match after match so we will put this behind us and focus.”

“We came into the game with our own plan. Though not perfect, we decided to hold them for most part of the game,” he said.

“We decided to play it tight when we realized that the long balls were not going through.”