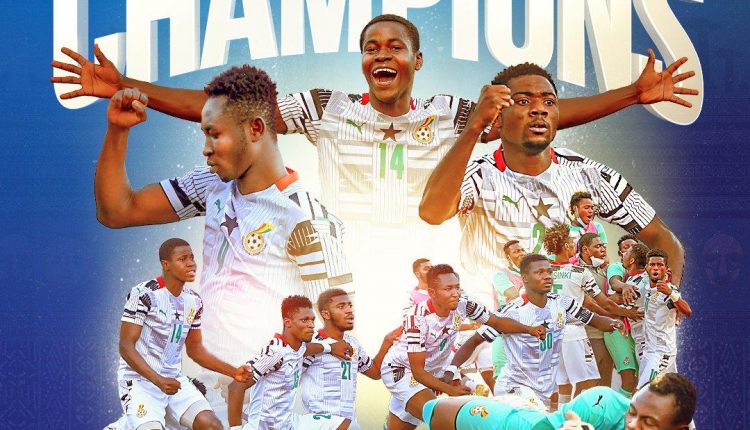 Ghana’s Sports Ministry has congratulated the national U-20 Black Satellites men’s team after winning the 2021 CAF U-20 Nations Cup tournament in Mauritania.

The Black Satellites lifted their fourth trophy in the CAF U-20 Championship in Mauritania on Saturday evening with a comprehensive victory over the Hippos of Uganda.

Despite being under early pressure from Uganda’s, Coach Karim Zito and his boys remained resolute and defended very well although the Hippos got some two good chances which they failed to utilize in the first fifteen minutes of the match.

Black Satellites determined to win U20 AFCON as Independence…

After the Hippos wastefulness upfront, Ghana began to grow in confidence after the quarter-hour mark and started taking full control of the game and played most of the match in the opponent half with great link-up play from defense to attack.

The Black Meteors came close to scoring after they hit the crossbar twice in a twinkle of an eye following a corner kick and started dictating the pace of the match with a dominant display.

2000 CAF Champions League winners Hearts of Oak striker, Daniel Afriyie Barnieh poked home the game’s opening goal from a close angle with his left toe to give the Ghanaians a very well-deserved lead before the end of the first 45 minutes.

Six minutes into the second half, the Ghana captain, Barnieh reacted the quickest in the box to score his second goal of the match with another left-footed finish after Percious Boah’s deflected cross from the left felt perfectly in his path to make it 2-0.

Afterwards, the game became a ding dong affair with both teams pushing for goals with Uganda starting to create some openings and calling Ghana’s goalkeeper Ibrahim Danlad into action.

The ministry took to Twitter to congratulate the Black Satellites for the historic feat.

Black Satellites determined to win U20 AFCON as…