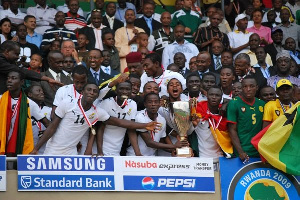 Ghana will be hoping to win their fourth Africa Youth Championship title when they meet Uganda in Saturday’s final in Mauritania.

The Black Satellites are hoping to lift the trophy for the fourth time having won the tournament in 1993, 1999 and 2009.

The last time Ghana won the Africa Youth Championship (now Africa U-20 Cup of Nations) was in 2009. They also became the first and to date the only African country to win the FIFA U-20 World Cup later in the same year in Egypt.

Ghana opened their campaign with an exciting 1-1 draw against Cameroon in the group A. Andre Ayew scored the goal for Ghana.

The Black Satellites won their second against game against Mali thanks to goals from Awako Gladson and Ransford Osei in a keenly contested game in Kigali.

Ghana’s Under-20 team advanced to the semi-final stage at and booked a qualification ticket to the World Youth Championship after beating host nation Rwanda 0-2 at the Amahoro Stadium.

Israel-based striker Ransford Osei got a brace that maintained Ghana on top of the Group A table.

In the semifinals stage the Black Satellites beat their South African counterparts, the Amajita 4:3 to qualify for the final.

Striker Dominic Adiyiah planted the ball in the roof of the South African net in the 26th minute after pouncing on a pull-out by striking partner, Ransford Osei, who outran South Africa’s Hilatshwayo Thulani on the right to plant the pass.

Ransford Osei followed up with Ghana’s second goal on the stroke of half-time, squeezing the ball home in the six-yard box after the South African goalkeeper failed to make a first time save of Osei’s earlier strike.

The South African’s pulled a goal back in the 54th minute, however the Ghanaians rallied quickly to restore their lead through skipper Andre Ayew who headed home from close range.

A brace from striker Ransford Osei powered Ghana’s Black Satellites to their third African Youth Championship title after a 2-0 victory over Cameroon at the Amahoro Stadium in Kigali, Rwanda

Osei, who also finished as the tournament’s top scorer with seven goals ensured Ghana’s claimed the ultimate at the expense of the Cameroonians.

The feat ensured that the Ghanaians confirmed their superiority of the Cameroonians after beating the Indomitable Cubs by a similar margin in the 1993 edition in Mauritius.

The closely fought encounter was characterised by midfield action as both teams struggled to make inroads into each others half.

But the Ghanaians made the best of the only chance of the opening half on 22 minutes, with Osei tapping home with the inside of his foot from a Samuel Inkoom pass from an ensuing cornerkick.

In the build up to the goal, Dominic Adiyiha saw his goalbound shot intercepted by a Cameroonnian defender.

The Cameroonians were gifted with an opportunity to draw equal two minutes to half time but Zoua Daogari blasted wide with the Ghanaian goalie daniel Adjei completely beaten.

Cameroon champions in 1995, resumed the second half strongly and pinned the Ghanaians to their half of the pitch in their quest to draw parity but the Satellites responded positively.

In the 58th minutes, Ghana defender Jonathan Mensah scopped the ball off the line after Inkoom had inadvertently diverted the ball into the net following a Cameroonian build-up.

The Cameroonians maintained dominance but their hopes of the equalizer died out in the 86th minute when Osei connected in again from Inkoom’s pass.

VIDEO: Let the spirit of independence inspire you to victory – Sports Minister tells Satellites ahead of U-20 finals