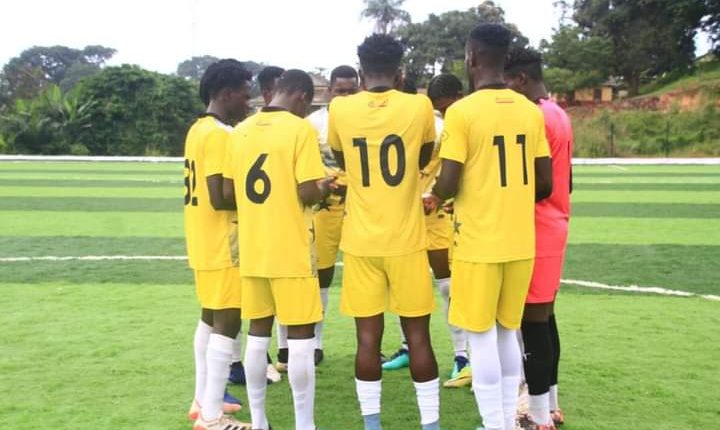 Skky FC stole the media traffic with win 8 win, 1 draw and 2 defeats in 11 outings to stay on top of Zone Two that has teams like Nations FC, New Edubiase, Nzema Kotoko, Kenpong FC among other top performing teams.

Skyy FC after losing match day 2 and 3 away, all came by 1-0 score line to New Edubiase at the Len Clay Stadium and Nation FC at the Dr. Kyei Sports Complex.

The Skky has been the limit to the Eagles of Wassa East from match day 4 to match day 11 now occupying the apex of the table, one point ahead of Nations FC. 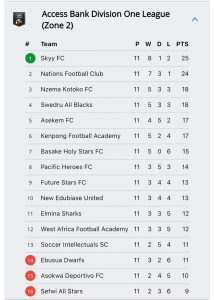 With just three games to end the first round, the Eagles of Wassa East might just be the unidentified wildcard in the competition as the search to play in the Ghanaian top-flight football next season takes shape.

The Eagles of Wassa East scored 15 goals and conceded 3 and bagged 25 points from 11 matches to affirm their their ruthless nature.

According to the club President, Hon. Wilson Arthur, the arrival of Coach Johnson Smith this season has really worked good for the team. The players have so much trust and respect for the former Karela United and Asante Kotoko coach.

Skyy FC is most definitely poised to make it to the Premier League this season. IS 2022/23 their the Akyy season, Hon. Wilson Arthur told Ghsportsnews.com.

Skyy FC started as a political project – Hon. Wilson Arthur bought Skyy FC as a struggling second division team, then known as Mighty Royals of Daboase and went round the district community by community with Scouts to find outstanding talents.

He assembled the team and qualified the team to Division one league with a One Hundred Percent winning record without a defeat in the season.

In their maiden season, Anas 12 truncated the league. Skky FC were third on the log after 13 matches with same point with second placed team.

In their Second season they won the novelty league in their Zone. Skyy FC was leading the table in the COVID truncated season and finished second in the full season after.

In the 2021/22 season, Skyy FC however made it to the Quarter Finals of the MTN FA Cup and got got beaten by Accra Hearts of Oak at the Accra sports stadium to exit with pride.

In the 2022/23, Skyy FC replaced their head coach Mohammed Abdul Malik with an experienced coach, Johnson Smith to come and strengthen their team. The performance in the ongoing Access Bank Division One on the pitch has been super. 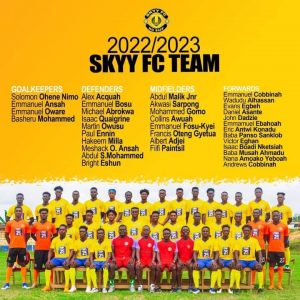 DOL REPORT: Sharp Shooting Baba Musah At The Double As…