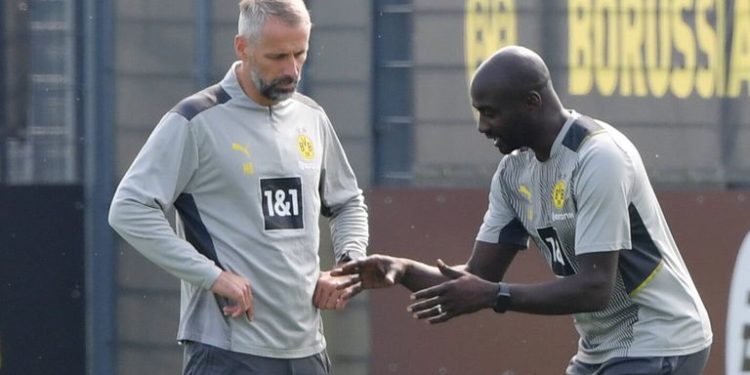 The Ghana Football Association are set to hold talks with Bundesliga side Dortmund over the services of Otto Addo, Footballghana.com can report.

Addo, who is the youth development coach at Dortmund led the Black Stars to secure qualification to the 2022 World Cup.

He took charge of the national team on an interim basis which was sanctioned by his employers.

Due to his exploits in the play-off against Nigeria, he has become a favourite for the vacant Black Stars coaching job.

Footballghana.com can report an agreement has been reached between Otto Addo and the Ghana FA, pending approval from his employers, Dortmund.

GFA President Kurt Okraku is currently in Europe trying to get the deal wrapped up before returning to Ghana ahead of the Africa Cup of Nations qualifiers.

“I have a good relationship (with Dortmund) so I hope they will allow me to continue to coach the Black Stars. Hopefully (I will be able to work with Dortmund and Black Stars at the same time,” he stated.

Otto Addo is expected to lead the Black Stars in the 2023 African Cup of Nations qualifiers which starts in June.

He will also take charge of the national team at the 2022 FIFA World Cup tournament to be staged in Qatar.

Ghana has been paired against Madagascar, Angola and Central African Republic in Group E of the qualifiers.

The qualifiers begin in June with Ghana hoping to qualify for the tournament again after the disappointment of AFCON 2021.