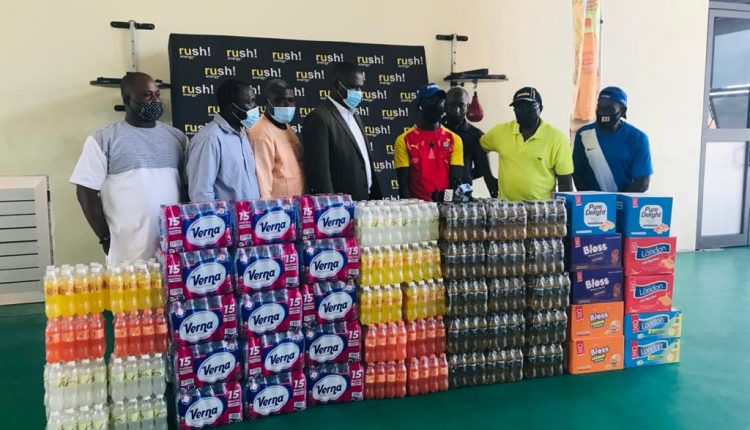 Twellium Industrial Company has presented some of their assorted products to Team Ghana, as promised when they signed the two year GH200,000 deal to become the Official Water and Beverage Sponsor of the GOC.

The presentation took place at the Trust Sports Emporium in Accra, where the Black Bombers who have qualified for the 2020 Tokyo Olympic Games have been training.

Sports Minister of Ghana, Hon Mustapha Ussif who received the package thanked the company for delivering on their promise and urged other companies to support Ghana Sports, especially the athletes and officials who are going to represent the nation at the Olympic Games.

He also made a personal donation of US$1,000 to the national boxing team, the Black Bombers which was received by the President of the Ghana Boxing Federation, Mr. George Lamptey.

Three amateur boxers have qualified, however the Bombers are looking forward for one or two additions to make it to the 2020 Olympic Games.

Technical Director of the Black Bombers Coach Ofori Asare on behalf of the team said they were very happy and are going all out to repeat history, because Ghana Boxing has sown a seed in Japan when the late Eddie Blay won bronze medal in 1964.

The qualified boxers, Sulemanu Tetteh, Samual Takyi and Shakur Samed voiced out that government must support them to feel motivated to deliver at the Games.

So far, 15 athletes have qualified to represent Ghana in boxing, athletics, judo, weightlifting and swimming.