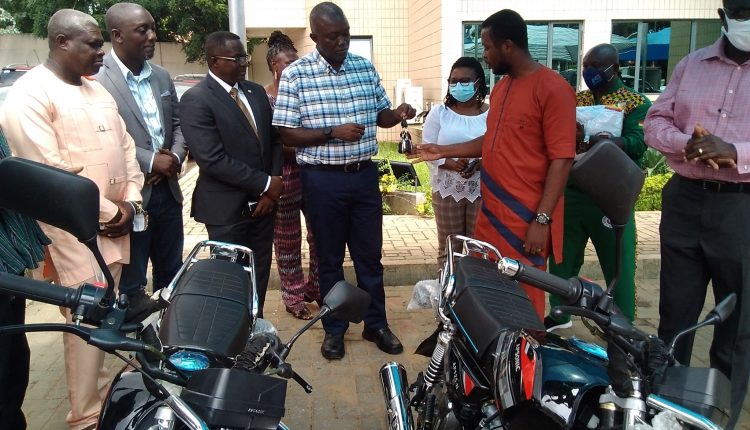 Mobility Technologies, one of the major sponsors of the Ghana Olympic Committee (GOC), have donate two Motor Bikes for local rounds  and dispatches of the body charged with the responsibility of the nation representing at major international games, notably the Olympic Games and Commonwealth Games.

The Apsonic bikes were presented by Mr. Jonathan Tetteh, Production Manager of Mobility Technologies on behalf of his CEO Francis Boateng and received by Mr. Isaac Duah, Deputy Treasurer of the GOC on Wednesday.

Mr. Tetteh said four years ago they donated a board room furniture set, and under the new administration still headed by the affable Mr. Ben Nunoo Mensah, they had to present two bikes to replace an old bike that got faulted after it was used to deliver a letter to their office.

Ashfoam Ghana to pay for kits of Ghanaian athletes at Tokyo…

He emphasized that the GOC under Mr. Ben Nunoo Mensah is vibrant and chalked many successes for Ghana; from attracting sponsors to winning medals.

Mr. Isaac Duah who is the President of Ghana Tennis Federation tested the bikes after the presentation, and promised to use it fruitfully to benefit the GOC and Ghana Sports in general.

Ashfoam Ghana to pay for kits of Ghanaian athletes at…