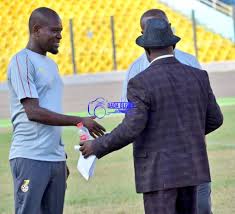 There’s a feeling within the Ghana Football Association (GFA) that, CK Akonnor was hired by Isaac Asiamah because he proposed him at the Presidency following the decision not to renew the contract of Kwasi Appiah.

When GFA notified the Ministry of their decision to let go of Appiah, many were unhappy. The Normalisation Committee had held discussions with Appiah and was working on renewing his contract.

But, Kurt Okraku and his team said no. There were serious disagreements.

Eventually, Jubilee House gave in, but insisted it must be a local coach.

Three days later, GFA presented a list of three coaches. CK Akonnor was not one of them.

Simply put, CK was not even part of the top five list of the FA.

Word had it that, lobbying had gone on behind the scenes. During the visit to the Jubilee House to agree on Appiah’s successor, CK name came up and it was mentioned by Isaac Asiamah.

President reportedly extolled his qualities saying; ‘he has managed Wise, Hearts, Kotoko, and even your very own Dreams FC. Give him the job.’

Kurt Okraku was stunned. This is a man I work with so, if he’s to be considered, I should have known.

It was the genesis of their issues. CK got a salary of $25k per month. Trust me, KK Sarpong was not even willing to pay that.

However, FA said they will work on ensuring he gets same salary as Kwesi Appiah, but GNPC would have none of that.

Many would recall when I shared his appointment and salary, I added there were some strings attached to the money.

Some people were going to get cuts from that money. Including journalists based on advice from these politicians.

When CK Akonnor made his first Europe, a plethora of things came up including players allegedly giving him money. CK heard these things and was disappointed. Whether true or not, I can’t authenticate.

But, the FA had their ears on the ground, too.

He named his first squad in February 2020. Before that squad was released, he was given a list. CK was not willing to budge. When I wrote the story, I remember the words of Garyal Smith vividly when I wrote that story. We allowed it to hang.

New names came up in the call-up.

After that call-up, the FA President had his reservations. Then allegations of CK working in the interest some agencies, notably, one Tony Appiah started flying in the tongues of FA officials.

Tony is CK akonnor’s friend. So any time his players were called, FA don’t get it.

It is alleged, Kurt Okraku said he won’t spend half a million dollars for someone to market his players through the national so it was not going to happen.

Anytime players were called, they will ask him to remove some names and replace them with others.

Kurt Okraku and CK Akonnor relationship deteriorated to the extent that, they were not on talking terms. It was at that point Kurt began lobbying to have CK sacked.

He tried three times without success. Powerful political hands were on CK.

After the failed attempt to sack CK, he invited some players for some games. Najeeb Yakubu and Edmund Ako Mensah were called.

The FA President replaced them with Gideon Mensah and Philemon Baffour.

When I shared this story, CK was accused of leaking the information.

Jones Alhassan Abu (blessed memory), Tourism boss (Black Stars management committee member), and CK Akonnor all came to me wanting to know my sources because the details of my stories are vivid from their meetings.

So, they blame CK.

Prior to this, CK Akonnor and Kurt Okraku had met Hon. Mustapha Ussif and he defined their roles, asking Kurt to stay clear because CK works in the interest of the nations.

Now, let me give a bit of credence to CK words last year when he was appointed.

He said was not going to call players based on names, and it is true.

He didn’t want to call Daniel Amartey. A leader of the FA asked him if he has any player who can play for Leicester.

Amartey had to come. Some of the new players were never invited by CK Akonnor. They were passed through the Technical Director to get CK to call them.

The recent call ups for the game against Ethiopia and South Africa.

They were 6 new players expected, but only Manaf (discovered by a journalist), Kyereh showed up.

CK Akonnor, also had issues with his assistant, David Duncan. Not sure he wanted Duncan to assist him. Their issues began in Turkey during the friendly matches against Mali and Qatar.

In fact, Duncan was not permitted to speak to the players. It was that bad.

If you frequented their sessions, you would notice that CK Akonnor was doing the sessions himself instead of the usual assistant leading it.

He was accused of ‘insecurity’.

This happened because, CK had given Duncan a session a few minutes before the start of the Mali match. Duncan wanted to warm the team his way, CK told Duncan in Ga, we won’t do it like that.

Because of this supposed insecurity, CK Akonnor reportedly refused to use scouting reports presented to him.

In the South Africa World Cup qualifier which happened to be his last match, an ExCo told me how he was presented with a vivid report, but he never used it.

The report was so detailed that, the ExCo member said if they had used it, their worst would have been a draw.

He was so angry that, he declared he has to go.

But, they needed political clearance.

There were two meetings with high ranking politicians to replace CK. The Ministry of Youth and Sports hadn’t approved as of last Friday, but a meeting this weekend brought CK to his knees, despite disagreement even within ExCo.

Hon. Mustapha Ussif watched the Ethiopia and South Africa games and was unconvinced, per sources, but he could not easily approve his sacking. He did some consultation, too.

I can’t state categorically whether the meetings last weekend got CK sacked, but it probably did.

There are lots of gaps created as some of the information could not be shared, but hopefully, this provides some insight.

About a week ago, Kurt Okraku, in the company of Mohammed Jiji Alifo, told some people he knew @akonnor_ck cannot do the ‘job’.

CK Akonnor was frustrated by Ghana Football Association to the extent that, a journalist gave him the world cup qualifiers fixtures.

The National Team Department of the FA did not give him that. He asked and they never did. CK got the fixtures when Pirates played at the Accra stadium.