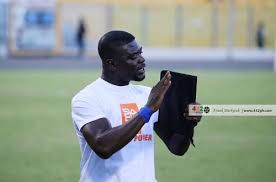 Accra Hearts of Oak coach Samuel Boadu has been named NASCO Coach of the month for May after leading the club to a perfect May.

Hearts of Oak won five Premier League games and lost one, scoring 8 and conceding two, a run of form that saw the Phobians jump from fifth to first in the Premier League table.

Participation fees for MTN FA Cup Round of 16 announced

Ibrahim Salifu crowned player of the month for May