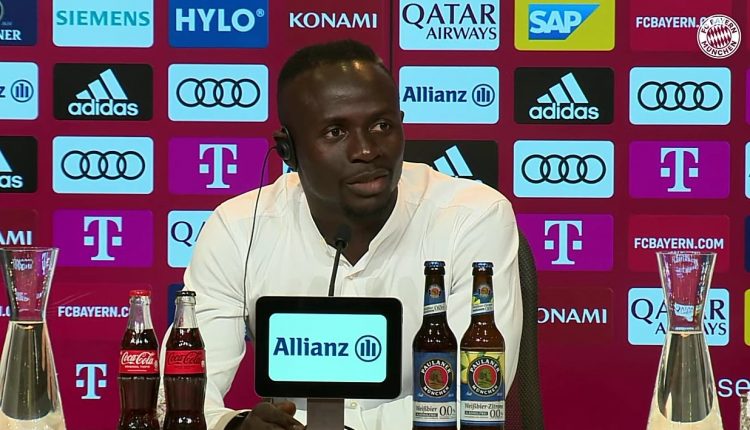 Bayern Munich have completed the signing of Liverpool striker Sadio Mane in a £35.1million ($42,98million) deal.

The 30-year-old, who had just 12 months left on his contract, has signed a lucrative three-year deal with the Bundesliga champions.

Speaking for the first time after joining FC Bayern with questions and answers, this is what the Senegal international have to say at the press conference;

Que: Mané on the city of Munich:

Ans “I’ve been here for two days and I’ve spoken to a lot of fans. It’s a beautiful city, I’m already in love. I am happy to be able to live here.”

Que: Mané on what made him choose Bayern

Ans: “When Bayern showed interest in me, I spoke to them and was so fascinated by the project that I didn’t have to think twice. I had other offers, but I chose Bayern because they are the right club.”

Que: Did you speak to Bouna Sarr about the move?

Mané on which shirt number he wants to have:

“We haven’t talked about that yet. There are many nice numbers, I will decide when the time comes. That doesn’t really matter to me at the moment”

Mané on whether he spoke to Klopp about moving to Germany:

“He’s a great coach and we have a great relationship. But I’ve always watched a lot of the Bundesliga, especially during my time in Salzburg. So I know it very well myself”

Sadio Mané: “Servus.I will answer in English and it will probably take another three months before I can speak perfect German. When FC Bayern showed interest, I spoke to my agent. I always thought Bayern is the right club for me. I’m here to help them win more titles.”

Que: What does the move mean for Senegal?

Mané: “As a player, you always represent your country. We Senegalese always try to represent our colors in the best possible way. Of course, I want to make everyone proud in my home country.”

Mané on Thomas Müller welcoming him:

“Thomas Müller seems like a nice guy, even though I don’t know him yet. I can’t wait to join the team and get to know everyone.”

Mané on the upcoming African player of the year award:

“These are individual prices. These are the fruits of your hard work. I’m excited to see how it will turn out. Such awards are always motivating, I don’t want to downplay that at all”

Mané on the secret behind being rarely nj injured:

“It takes a bit of luck, but I take care of my body and work on myself. I have dedicated my life to football”

Mane leaves Liverpool having scored 120 goals and provided 38 assists in 269 appearances during his six seasons at the club. At the Reds, he won the Premier League. Champions League, FA Cup, Carabao Cup, UEFA Super Cup and FIFA Club World Cup. He also won the African Cup of Nations with Senegal in February after beating Egypt on penalties while Mane could have had three Champions Leagues had Liverpool not lost in the final to Real Madrid twice.

He has also scored 31 goals in 89 appearances for the Senagal national team, having made his debut at the age of 20. In the winter he won the Africa Cup of Nations together with Bayern’s Bouna Sarr. Mané was named African Footballer of the Year in 2019.

OFFICIAL: Bayern have completed the signing of Sadio Mané from Liverpool on a 3-year deal until 2025 [+ Photos]

OFFICIAL: Bayern have completed the signing of Sadio…