Sadio Mané has completed his switch to the German Bundesliga after joining FC Bayern Munchen. Mané moved from Liverpool to join the German champions in a three-year deal. He has been unveiled this today in Munich.

The move would see him becoming the highest paid African player. His new contract worth 35.1 million pounds will end in 2025. The Senegalese striker is expected to receive an amount of Two Hundred and Fifty Thousand Pounds a week. 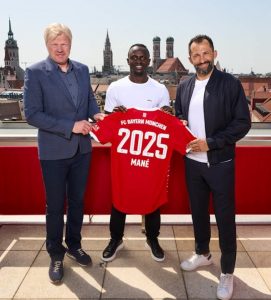 He would earn more than teammate Mohammed Salah who receives £220,000 a week.

At his unveiling, Mane revealed that; ‘I’m very happy to finally be with FC Bayern in Munich.

‘This is the right time for this challenge. I want to achieve a lot with this club.’

Sadio Mane has had his name in the media for some time after the season ended. He helped Liverpool place second in the Premiership which was won by Manchester City on the last day. His side also lost in the finals of the UEFA Champions League to Real Madrid.

Nonetheless, the diminutive attacker did not leave empty handed after Liverpool won two trophies. They beat Chelsea in the two finals of the FA Cup as well as the League Cup respectively.

The 30-year-old striker joined Liverpool in 2016 from Southampton. He has scored 90 goals in 196 official matches for the Reds but in all, 120 goals in 296 games. He also won six major trophies with Liverpool.

Mane would go to the 2022 FIFA World Cup as a Bayern Player after helping his nation to qualify for the Mundial ahead of Egypt.

MTN FA Cup Final: How Hearts of Oak And Bechem United Made It To Kumasi