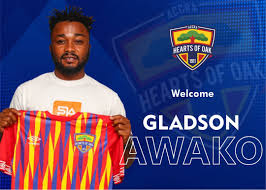 Hearts of Oak midfielder, Gladson Awako has reportedly quit the club after just one month of joining.

The 31-year-old joins the Ghana Premier League champions after a successful stint with city rivals Great Olympics in the 2020-21 season and was expected to play a vital role in Hearts of Oak’s CAF Champions League and Premier League campaigns respectively.

Multiple reports in the local media say the 31-year-old has informed the management of the club of his decision.

The experienced midfielder has reportedly told his close associates and confidants that he has been receiving spiritual attacks since he signed for the Phobians from rival club Accra Great Olympics.

The former Great Olympics captain has missed Hearts’ last three friendlies after going under the weather and could have missed the club’s CAF Champions League preliminary round clash against Cl Kamsar in Sunday.

The former Great Olympics man last featured in the Club’s 2-0 win over Tema Youth has last week and has since not trained with the team.

CONFIRMED: Hearts of Oak’s CAF CL game against Cl Kamsar to be played behind closed doors