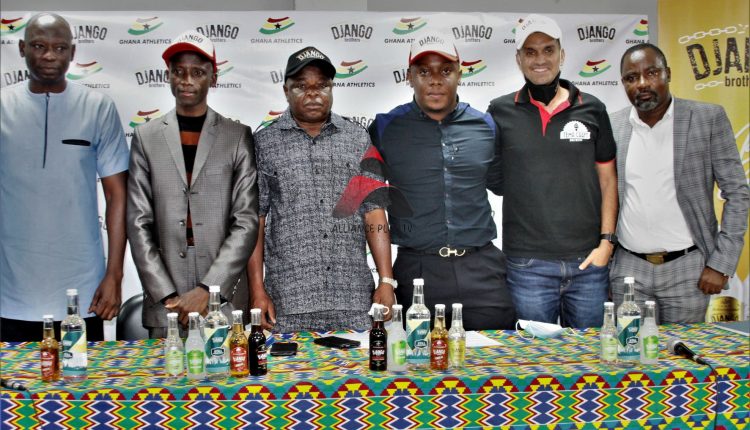 The Ghana Athletics Association (GAA) has secured a three-year sponsorship deal with Django Brothers Company to support the growth and development of Athletics in the country.

Django Brothers Company, producers of glass bottle water and soft drinks signed the sponsorship agreement with GAA on Tuesday, September 7, 2021 at the Media Center of the Accra Sports stadium.

Mr. Chris, Marketing Executive of Django Brothers Company said the company had talks with GAA at least two months before the Olympic Games in Tokyo and expressed gratitude to the GAA for the partnership.

To us this is not just a flagship partnership, this is something that we are very intensional about it at TCB and his outfit will do everything to support Athletics in the country.

The President of the GAA, Mr. Ababu Afelibiek expressed gratitude to Django Brothers Company for coming on board to the support GAA to help to organize athletics Championship in the country.

He said, “Over the years we have been organizing competitions trying to look for sponsorship to help us deliver and fortunately for us, today we have Django Brothers Company in our midst. We had series of discussions and negotiations they ha e come out to support GAA”.

“The partnership that we have entered with them, it’s going to last for three years which will be renewable after the three years,”

“They are going to help us organize athletics events in the country, every year, they’re going to sponsor one major event which will be christened Django Brothers National Athletics Championship.”

According to the Chief Executive Officer (CEO) Mr. Bawah Fuseni, they hardly get such a partnership or sponsorship which goes beyond an event.

“This partnership and sponsorship is not just an event. It is a process we are starting and we are going to go to the world and Olympics with this partnership,”

“This is all we have been looking for and today we have given birth to a new page in Ghana Athletics.”

The three-year sponsorship deal is subject to renewal after the initial contract elapses.