Former Asante Kotoko Chief Executive Officer (CEO) Herbert Mensah has expressed his gratitude to President Akufo-Addo for supporting the commemoration of the May 9 Stadium Disaster.

The May 9th 2001 occurred during a match between Ghana’s two most successful football teams, Accra Hearts of Oak Sporting Club and Kumasi Asante Kotoko. Trouble had been anticipated, and extra security measures had been taken. The home side scored two late goals to defeat Kotoko 2–1 which led to disappointed Kotoko fans throwing plastic seats and bottles onto the pitch.

The response to this crowd disturbance from the police was to fire tear gas into the crowd. Panic ensued and a resulting stampede led to the deaths from compressive asphyxia of 127 people .

Since that tragic day in 2001 a group of philanthropists under leadership of Herbert Mensah, supported by various individuals and companies in Ghana, religiously remembered the day with a series of events that include prayers at churches and at the central mosques in Accra and Ghana, a huge “May 9th Remembered Street Walk” in Kumasi and a May 9th Remembered football match between teams from both the South and the North.

As part of activities in marking this year’s anniversary, Mr. Herbert Mensah who was the Asante Kotoko Chairman when the incident happened was invited to the Jubilee House alongside his team by President Akufo-Addo.

President Akufo-Addo has assured Herbert Mensah and executives of the May 9 Foundation that his administration will offer them it’s support to ensure that it goes about its activities aimed at supporting the families of the victims of the May 9th Accra sports stadium disaster. 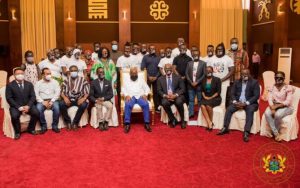 President Akufo-Addo gave this assurance when he received a delegation from the foundation at the Jubilee House today. The meeting was the first of its kind between a sitting President, the foundation and surviving families of the victims of the disaster throughout its twenty (20) year history.

Addressing the team at the flagstaff house the president was full of appreciation to the team for constantly commemorating the day and assured the May 9th foundation of his support.

“The human beings can never come back but we can always remember them, I’m intrigued by the idea that the” May 9 Foundation” has gone beyond football, that you have embraced the wider social space by including flood and fire disaster victims. This is a huge undertaking and you need a lot of courage and capacity to be able to carry out that work. You will have the modest support that this administration will be able to give you, i can promise you that” President Akufo-Addo stated.

“The Minister for Sports is working on a package we can work out on our side to continue the assistance soon, he will be engaging with you on that” President Akufo-Addo added.

Mr. Herbert Mensah who is also the Founder and leader of the “May 9 Foundation” in his remarks noted that the Foundation is extremely grateful to the President and his administration for the recognition afforded them by inviting them to the seat of Government. He indicated that the foundation has decided to enlarge its scope of work to offer assistance to Ghanaians who may be affected by other natural disasters other than the May 9 tragedy.

“In twenty years, this is the first time that a sitting President of the Republic has recognized what it is that we are doing. In twenty years, Mr. President, you are the first President to spent time from a very busy schedule, we understand the affairs of State. We understand the difficulties of being in COVID, the difficulties in trying to resuscitate things in this very difficult time which many people perhaps do not understand, but we do and we appreciate even the few minutes of your time” Herbert Mensah said

Watch the full video below:

Black Queens Draw Nigeria In First Round Of 2022 AWCON Qualifiers