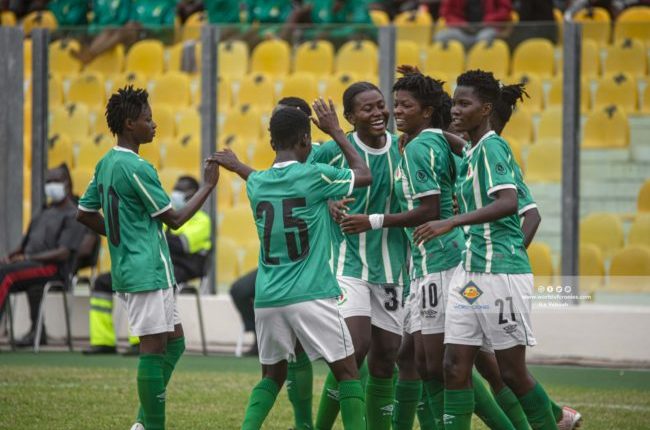 Hassacas Ladies are set to splash the cash in the coming days as they seek to boost their playing body with a trusted goals Scorer.

The Doooo scored an impressive 33 goals from 15 games with multiple goals Scorer in the team but have since identified attacking reinforcement as an area of priority.

The technical team of Hassacas singled out Northern Ladies FC attacking sensation, Jafar Rahama, as the player to complete their jigsaw puzzle.

Northern Ladies’ Anatu Sadat is the first Muslim player to…

Milot Abena Pokua, Doris Boaduwaa and Veronica Appiah have been the club top Scorers in the Women’s League.

Ghsportsnews.com can exclusively report that, the Doooo have opened negotiations with Northern Ladies attacker ahead of the West Africa ‘B’ Women’s Champions League.

Jafar Rahama racked in 10 goals and 8 assists in 13 games for Northern Ladies FC in the 2020/21  Women’s Premier League.

Hasaacas Ladies have been drawn in Group B of the WAFU Zone B Women’s Champions League tournament alongside Nigeria’s Rivers United FC and Benin’s AS Police de Niamey.

It’s the first of its kind tournament with Hasaacas Ladies the representatives of Ghana.

Hasaacas Ladies first taste of the tournament will be against Rivers Angels FC on July 17, 2021 at the Stade Champroux and will play AS Police on July 23, 2021 at the same stadium.

The team after winning both the Women’s Premier League and the Women’s FA Cup trophies are currently putting in the work ahead of the WAFU Zone B Women’s tournament which starts in 12 days’ time.