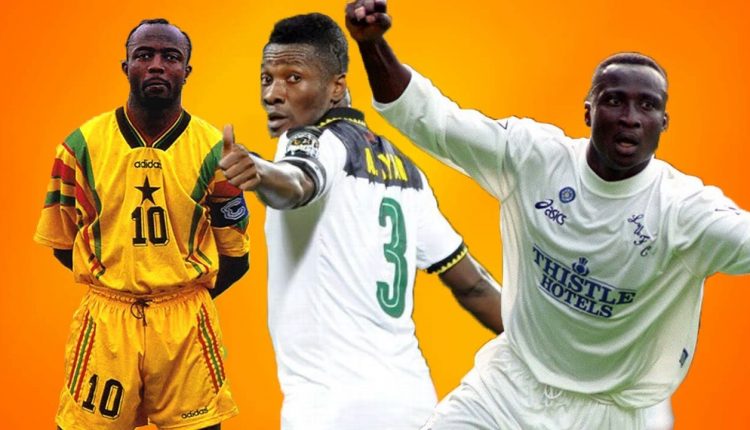 Ghana captain Asamoah Gyan has hit back at Abedi Pele over his reported criticism of the constant Ghanaian player exodus to the Arab and Asian countries which he believes is targeted at him.

Gyan, who is Africaâ€™s highest paid player, is unhappy with the criticism of the Ghana legend, which is perceived to be targeted at him after he joined Chinese side Shanghai SIPG on a mouth-watering deal.

Abedi Pele, a three-time African Footballer of the Year, painted a gloomy picture of the local league in a recent interview in the West African country and criticized the move of top Black Stars players to the Arab world, with claims the consequence will be calamitous for the nation.

There is a danger the future is not bright at all and I’m very very worried, Abedi told Accra-based Citi FM last week.

The typical example that you can say is what is actually happening.

You can see most of our players are now going to the Arab World..are going to various countries which football is not on the highest level.

What is the future if you think we have?, we don’t have a future.

If we don’t get players playing in France or Italy or Germany, very soon we will have a serious problem and we will be seeing the situation crumbling, crumbling gradually and then we start blaming people.

But Gyan is disappointed with the judgment of the iconic Ghanaian figure after revealing he gave his seal of approval before he signed for Al Ain from Sunderland in 2011.

He feels he been betrayed by the comment from the Marseille legend.

I am very shocked by the comments made by him, Gyan told Kumasi-based Angel FM.

I don’t know whether he actually made such comments but if it’s true, then I will be very surprised and highly disappointed. “I have played in those countries that he is talking about: Italy, France and England,” he fumed

â€œWhen I first made the decision to move from Sunderland to Al Ain and when a lot of people were criticizing me, he was one of the persons behind me giving me the support.

He advised and gave me the support because first and foremost he had played there before.

“He told me not to listen to what Ghanaians will say about my move. And I also felt that for a legend like Abedi, whom I recognize as Ghana best player of all time to take a phone to advise me on this was good counsel but for the same person to turn round and grant an interview to say such things, I am really surprised and disappointed in him.

I looked up to him as a legend. I believe no other player in Ghana has played the kind of football he played in his time so his support meant a lot to me.

â€œAnd now to here he is making contrary views, is very shocking and highly disappointing. It makes me wonder whether the support he initially gave me was genuine.â€

The Black Stars captain has hit the ground running with his â€˜insaneâ€™ scoring prowess with four goals so far since joining the ambitious Chinese side.

The Ghana Premier League from the lenses of an Italian writer, D’Ambrosio Nicola