Asante Kotoko Chief Executive officer Nana Yaw Amponsah over the weekend dedicated his Ghana Football Awards’ CEO of the year to President of Cheetah FC Abdul Haye Yartey, insisting the later was a genius who needed to be celebrated. 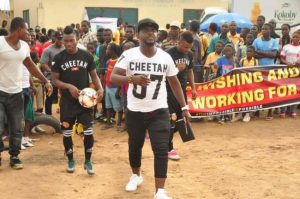 Nana Yaw Amponsah, who was awarded for transforming the fortunes of Asante Kotoko on and off the field of play in expressing his appreciation to the organisers of the awards said he feels so elated to have been given the recognition for the work he’s done over the year, and will further dedicate the award to Haye Yartey for his innovation in Football administration.

“Thank you so much for this honor, I will like to dedicate this to a Young man who has done so well in the industry, Abdul Haye Yartey” Nana Yaw told the gathering.

Abdul Haye Yartey is seen as a revolutionary in Football following his developmental projects that has seen him began the processes to build the Cheetah sports Complex.

3 weeks ago, ‘The Okoso Football field’ was unveiled as the only standardized astro pitch in Ghana by Cheetah FC, with other facilities also coming up.