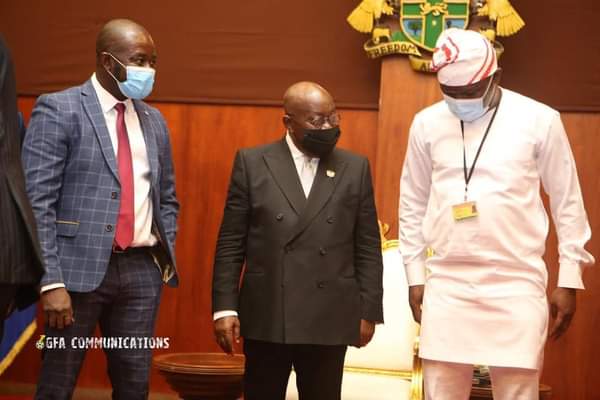 As the Black Stars gear up for another campaign to end Ghana’s 40-year African Cup drought and pursue another world cup qualification ticket, Sports Minister, Mustapha Ussif, has launched a campaign to appeal to corporate Ghana to support the Black Stars through sponsorship.

The move, in fulfillment of his promise to pursue alternative sources of funding the national teams, began today with a special breakfast meeting, hosted by President Akufo-Addo at the Jubilee House with targeted corporate institutions.

In attendance were Chief Executive Officers of the institutions, mainly mining and oil companies.

A Letter To South African Football On The Occasion Of Ghana…

Black Stars To Miss Star Midfielder Ahead Of Make-or-break…

Mustapha Ussif, who made a strong case for corporate support for the Black Stars, stressed that such corporate intervention would compliment government’s sports funding efforts and allow the government to fairly use monies it would have used on the Black Stars to develop other sports disciplines crying for attention.

“In spite of the appreciable increase in the sports sector’s budgetary allocations in the past four years, there is still the need for alternative funding to gurantee sustainable development in sports in the country, and also to help govermment finance the ever-increasing cost of funding our national football teams, especially the Black Stars,” Mustapha Ussif said.

“Supporting the funding of the Black Stars will enable government to use our sports budget fairly to support other sporting disciplines, especially as the nation gears up for the Tokyo Olympics in July,” he added.

Mustapha Ussif drew a correlation between sponsorship and performance, especially the Black Stars, and urged the institutions to come on board.

“Historically, the Black Stars have done so well any time corporate Ghana has thrown its weight behind the team. The only exception, of course, has been the team’s inability to win the Afcon, but they have been so close to winning on a number of occasions.” he said.

“Then in 2010, the Ghana National Petroleum Corporation (GNPC) also offered the Black Stars significant sponsorship support, and this helped the team to qualify for the 2010 and 2014 World Cups in South Africa and Brazil respectively.”

“The Black Stars did not only qualify for the World Cup, they also impressed the world by reaching the 2nd round of the 2006 World Cup and quarter finals of the 2010 edition. The Black Stars also reached six semi finals of the Afcon between 2008 and 2017 and came close to winning it twice but lost in the finals.”

“Evidently, there is a linkage between corporate support to our national team and performance. And as we seek to replicate the memorable performances of the past, we surely will require your support, once again.”

The Sports Minister added that apart from their interventions complementing government’s efforts and aiding the Black Stars, there are also benefits to be derived by the companies from such partnerships and support.

The Black Stars, will in June this year, commence qualifiers for the Qatar 2022 FIFA World Cup and also participate in African Cup of Nations in January next year.

In the absence of any significant corporate sponsorship for the Black Stars, government has been the sole financier of all national teams.

The special, high-level corporate engagements by the Sports Minister is to make a strong case for the Black Stars to be supported.

The high-level engagements will continue in the coming days with heads of organisations in other sectors.

A Letter To South African Football On The Occasion Of…

Black Stars To Miss Star Midfielder Ahead Of…