“We will win the league” – Hearts of Oak Goalie Richard Attah 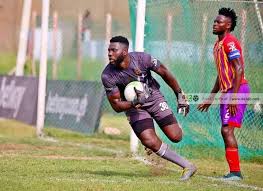 Shot-stopper for Accra Hearts of Oak, Richard Attah has said the capital base club will easily win the 2020/2021 Ghana Premier League.

Richard Attah has been very impressive since returning from injury a couple of weeks ago. The former Elmina Sharks goalie has kept 5 consecutive clean sheets and a total of 10 clean sheet this season.

During an interview monitored on MO TV, the huge goalkeeper was very optimistic about the chances of his club breaking the trophyless jinx “we will win the league very simple, to me is 99.9% that Hearts will win the league, if I watch the coach and the players, we have now its already a done deal” the player opined.

Accra Hearts of Oak are currently top of the league log with 49 points and two points over their bitter rivals Kumasi Asante Kotoko. The Phobians were at their very best in the first half of the game at the weekend when they defeated Berekum Chelsea two nil.

Goals from Benjamin Afutu and Kwadwo Obeng Junior were enough to seal the three points for the Phobians.

With a lengthy barren run of over 11 years without a league crown, Hearts of Oak SC will be looking to end that domestic hoodoo in the 2020/21 Ghana Premier League kicks off later this year.