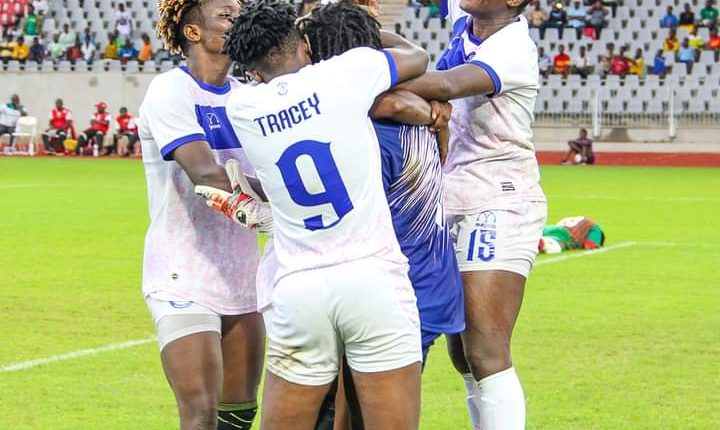 Ghana Women’s Premier League side, Ampem Darkoa Ladies, are through to the final of the Wafu Zone B Women’s Champions League qualifiers after a penalty shootout win over Africa Sports D’Abidjan.

Ampem Darkoa played the last 24 minutes of regular time as well as the extra time with 10 women after Ophelia Amponsah was sent off after picking up a second yellow card of the game.

They beat Africa Sports D’Abidjan 6-5 on penalties after playing out 1-1 in 120 minutes.

Africa Sports started the game on a strong foot after opening the score just two minutes into the encounter at the Stade Yamoussoukro.

Despite going behind early in the game, the Nana Mma ladies looked the better side in the remaining minutes of the first half as they pressed for the equaliser. They however went into the break with nothing to show for their hard work.

Nana Joe Adarkwa’s team continued their search for the leveller after recess and were rewarded through Gladys Amfobea, who struck from 30 yards out to make it 1-1.

Having been booked already, Amponsah was then giving her marching off orders for a non-existent foul on the opposition player with Ampem Darkoa playing with 10 women for the remaining period.

After an unchanged score in extra time, the game then headed for a penalty shootout where the Ghanaian side won the game with a 6-5 score.

Amepem Darkoa Ladies will now wait for the winner of the game between Bayelsa Queens FC and Espoir FC in the final.