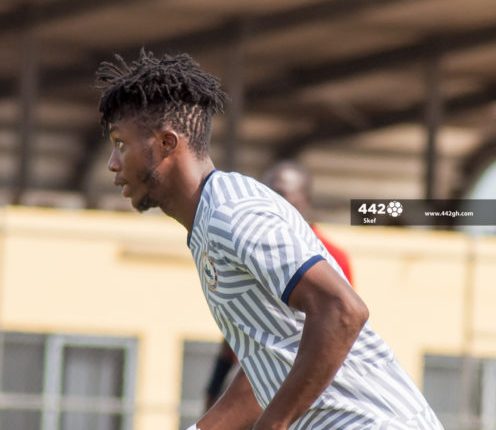 Berekum Chelsea forward Bright Amponsah has scored his way into annals of the history of Ghana football.

The 26-year-old scored what appears to be the fastest goal this season when he opened the scoring just 23 seconds into the start of the highly charged game against WAFA SC at the Golden City Park in matchweek 22 early kick-off game in the Ghana premier league on Friday afternoon.

Bright Amponsah shot the Blues into the lead with an easy finish after the goalkeeper of WAFA Kwadwo Osei had blocked his initial shot.
WAFA scored the leveller inside the 22nd minute as Justus Torsutsey grabbed his first goal of the campaign to the disappointment of the home fans.

The Academy boys increased the tally one minute later – Enock Asubonteng tapped in from close range after being left unmarked.

Berekum Chelsea changed their play by resorting to wing play and with three minutes to end the first half, a goal-bound Kofi Owusu was fouled in the WAFA box for a penalty to Chelsea. Stephen Amankonah stepped up to score the equalizer after a second attempt to take his season tally to six goals.

Back from the break, WAFA scored the winner in the 48th minute through Issah Basit. The forward left unmarked at the far post beat goalkeeper Obeng Sekyere to slot home.

Meanwhile, Karela United striker Diawisie Taylor holds the record as the player with the fastest goal in the history of the Ghana Premier League (14 seconds) which was set in a premier league game against Ebusua Dwarfs in 2018 at the CAM Park.