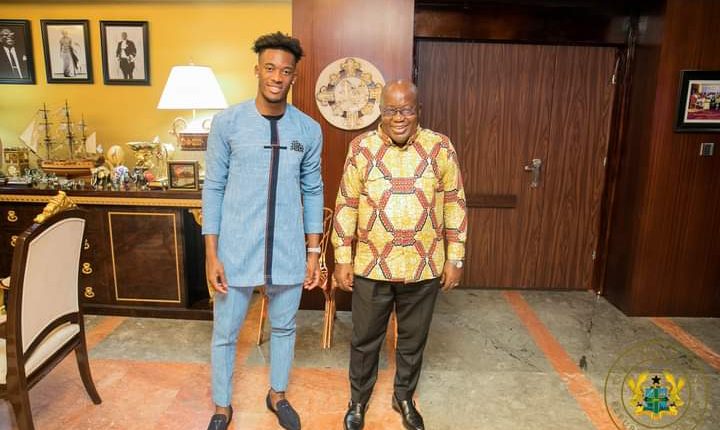 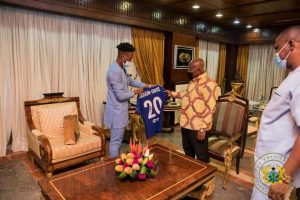 There’s been a lot of frenzy on social media as Chelsea and England winger Callum touched down in Accra last week.

SHOCKING: How CK Akonnor got Black Stars Job and why he was…

Although the winger’s mission is unclear, it is believed that he has arrived in the West African nation, where his parents come from, for holiday. He touched Ghanaian soil only four days after helping The Blues win the 2021 Champions League in a fiercely contested final against Manchester City.

On Sunday, Odoi was at the Accra Sports Stadium to watch the Ghana Premier League game between Hearts of Oak, a club his father played for versus Great Olympics where the Phobia fans presented a customised jersey.

On Monday, he paid a courtesy call to the President of Ghana, Nana Akufo-Addo at the Flagstaff House.

Nana Akufo-Addo urged the Minister for Youth and Sports, Mustapha Yusif to explore the possibility of having Hudson-Odoi switch nationality and play for the Black Stars. 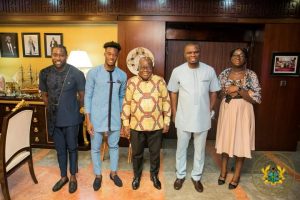 Meanwhile, the 20-year-old has opened the door to play for Ghana in the future.

The youngster, though born in England, has Ghananian parentage, and can switch allegiance to the West African country.

Hudson-Odoi has already made three senior outings for the Three Lions, and one more could shut the window of opportunity.

According to FIFA rules, a player will be tied to a certain nationality if he features for the senior team more than three times.

Addressing Chelsea fans at Alisa Hotel in Accra on Sunday morning, Hudson-Odoi suggested he is open to featuring for the Black Stars.

“I think obviously when you’re young, you have the opportunity to play for England throughout all the years, from under 15 to under 16 all the way up,” the 20-year-old said.

“When they obviously gave me the opportunity to come I was in the country already. It’s something that I already had in my mind, set on already playing for England.”

“So it was the thing obviously choosing Ghana or England, and at the end of the day I said I always had the right people around me who always advise me – what’s right, what’s wrong. England came and I said ‘Yeah, let me go and play for my country.

SHOCKING: How CK Akonnor got Black Stars Job and why he…