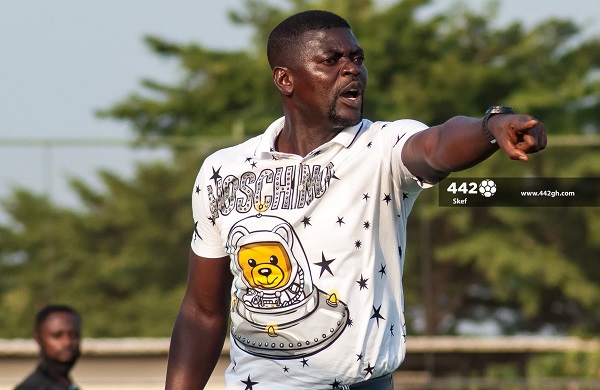 Accra Hearts of Oak Coach Samuel Boadu has made a huge call on the Ghana Football Association to consider introducing Goal Line Technology in the Ghana Premier League.

an Unhappy Samuel Boadu believes his side could have won the Ghana Premier League clash against city rivals Great Olympics if the technology was in place.

Mr Boadu’s call came after Referee Rustum Senorgbe and his assistance failed to award them what seem to be goal after striker Isaac Mensah’s long range shot hit the roof of the net before bouncing out in the 22nd minute of the game.

The Gaffer believes if there was a technology, the goal would have stood for his side’s early lead in the game that produced lots of tension.

The maintains the action of the referees to disallow the goal changed the complexion of the game, as his team lost some steam from that action.

“if that goal had been awarded, we could have done much better that this, if they bring the goal line technology it will help, we will do much better than this” he added.

Accra Hearts of Oak and their rivals settled for a pulsating 1-1 draw at the Accra Stadium in a game that saw lots of drama including supporters breaking one of the gates to enter.

The results of the game leaves both Hearts of Oak and Asante Kotoko on same points after the porcupine warriors won their game against Ashantigold SC.