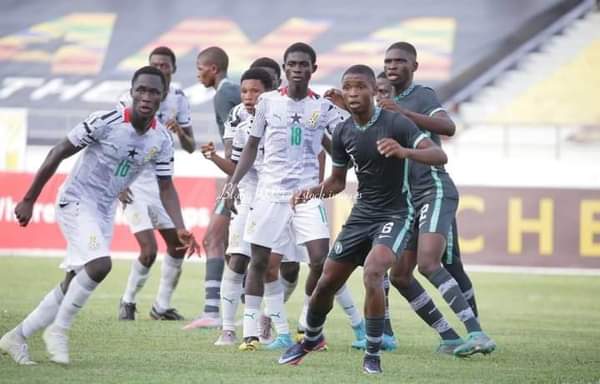 Ghana crashed to a 4-2 loss to Nigeria in the opening match of the WAFU B U-17 Cup of Nations qualifiers at the Cape Coast stadium on Saturday.

The Black Starlets went into the game seeking a perfect start to the tournament but a well drilled Nigerian side made life difficult for Samuel Fabin’s side who had a larger share of ball possession but showed less composure in front of goal.

Ghana started the game in an explosive manner but it was the Nigerians who showed their intent after Abdul Azeez hit the side post in the 10th minute before shooting into the lead in the 13th minute as Emmanuel Michael fired home an absolutely sensational free kick to make it 1-0 to the two-time African champions.

Ghana began to push forward in search of the equalizer but an error in goalkeeping resulted in the second goal as Precious Williams gave scored in the 43rd minute to give Nigeria a commanding 2-0 lead.

The Nigeria captain tapped home a rebound after Ghana goalkeeper Ahmed Amadu Dembara spilt a long range shot from Kewe Iyede as the Eaglets went into the break with a 2-0 cushioning.

Back from recess, the Black Starlets piled the pressure on Nigeria – plan to reduce the deficit but it was Nigeria who went 3 goals up after a howler from Amadu Dembara. This time Djibril Azeez who got the game’s first shot on target got his name on score sheet after Dembara failed to grab a goal bound low drive.

Ghana came alive in the 58th minute after striker Abdul Razak Salifu smartly weaved his way through the Nigerian defence before smashing a low shot into the right bottom corner to make it 3-1.

The goal energized the Black Starlets – as they kept fighting for more but Nigeria had other ideas as substitute Light Eke made it 4-1 after connecting from a corner kick in the 78th minute – to throw the game beyond the reach of Ghana.

Ghana captain Colins Agyapong scored from the spot in the 88th minute as the game ended 4-2 in favour of the Golden Eaglets of Nigeria.

The Black Starlets will play Togo in their second group game on Friday, June 17, 2022 at the Cape Coast stadium.