MTN FA Cup Round 32: Defending Champions Hearts Of Oak Dumped Out of Competition 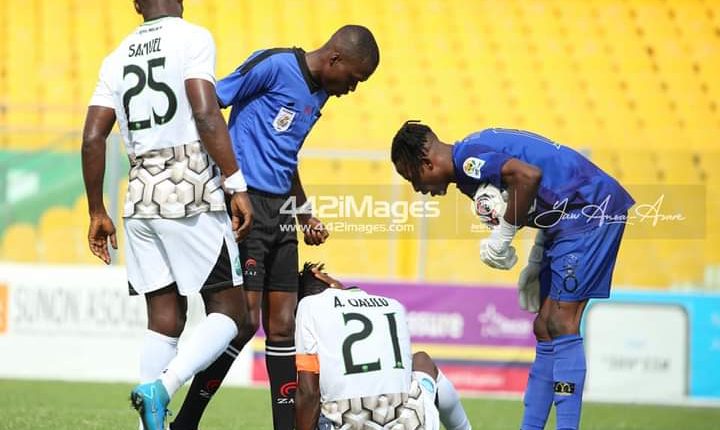 Defending champions Hearts of Oak have been knocked out of the MTN FA Cup after losing 1-0 to Dreams FC at the Accra Sports Stadium on Sunday.

The Phobians were hoping to defend the trophy for a third time but have been eliminated in the Round of 32 by the Ghana Premier League side.

A howler from Hearts of Oak goalkeeper Richmond Ayi saw Dreams FC striker Agyenim Boateng score the only goal of the game in the first half.

MTN FA Cup: Meet The Full List Of Qualifed Teams For Round…

Earlier on, The Phobians were denied a penalty following a tackle on Enock Asubonteng who had a one on one with the Dreams goalkeeper and was fouled from behind by the defender.

Hearts of Oak were awarded a penalty late in injury time but they failed to make it count as Benjamin Yorke and Samuel Inkoom missed from the spot kick.

There was more drama in the closing minutes as Dreams FC officials ordered the players to walk of the pitch after the referee had whistle for the penalty awarded to Hearts of Oak to be retaken after the first attempt was saved by the goalkeeper.

Replays showed the Dreams FC goalkeeper had come off his line to save Benjamin Yorke’s earlier kick.

MTN FA CUP SCORED BOARD: Detailed Results On All Round Of 32 Matches Played

MTN FA Cup: Meet The Full List Of Qualifed Teams For Round Of 16