MTN FA Cup Final: How Hearts of Oak and AshantiGold SC made it to Accra 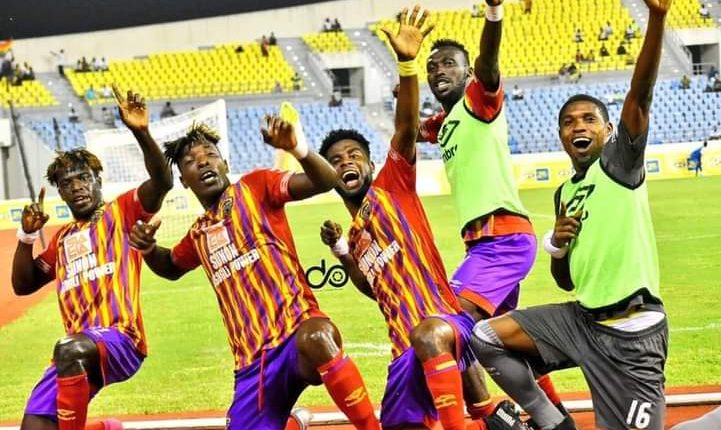 But how did they make it this far

Hearts of Oak began their 2020/21 MTN FA Cup campaign at home with Premier League side Liberty Professionals. Hearts beat Liberty 3-0 to booked their ticket to the round of 32.

The Phobians have struggled to beat lower side Accra Young Wise in the round of 16. It was Daniel Afriyie 78 Penalty that made the difference as the Rainbow club make it to the next stage of the competition.

Hearts traveled to Elmina to face sharks. And again, The Phobians manage to beat Elmina Sharks 1-0. Amanakwah free- kick goal was enough to send Hearts to the semi- final.

Hearts of Oak made it to the final of the MTN FA Cup after Samuel Boadu boys beat Medeama SC 3-0 at Cape Coast Staiuum.

AshantiGold SC campaign began with a tip to Techiman where confronted with Premier League side King Faisal. The Elephant manage to secured 1-0 victory over King Faisal.

AshantiGold SC came against a lower-tier Aboi Young, where they managed a 2-1 win to secured a place in the last 16.

AshantiGold SC proved too strong for Aduana Stars when they beat Aduana 4-2 at their back yeld.

Another round, another lower-tier side, this time facing Kintampo Top Talent. And again, AshantiGold SC record another 4-2 scored line.

AshantiGold SC met a premier league club again Berekum Chelsea. The semi final matchup at the Cape Sports Stadium was level and entertaining with both teams out for a win. However, the game was not decided till extra-time when AshantiGold SC scored 4-1 to get to the final of the MTN FA Cup.