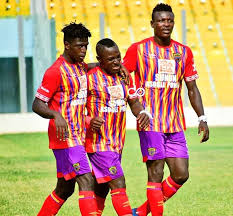 Accra Hearts of Oak commenced the second round of the 2020/21 Ghana Premier League with a 2-0 win over Aduana Stars on Sunday night at the Accra Sports Stadium.

The hosts picked all three points in their matchday 18 fixture to boast their hope of winning the league this season.

It took the phobians 30 minutes to be able to break the back of the Aduana Stars when Patrick in one of his runs through the Aduana defence was heckled by Nurudeen Abdulai for referee Andrews Awurisa to whistles for a penalty, Victor Aidoo stepped up to the challenge it a thunder bolt shot to the roof of the net for the first goal.

Benjamin Tweneboah, Samuel Bioh, and Sam Adams proved to be a torn in the flesh of the phobians who struggled to counter their midfield play.

Just when all seemd completed, Salifu Ibrahim produced a magical flip to Patrick Razak who raced to the right flank before releasing a shot across the face of the Aduana goal, only for Hafiz Adams to deflect into his own net for the second and final goal of the game to the relief of Samuel Boadu.