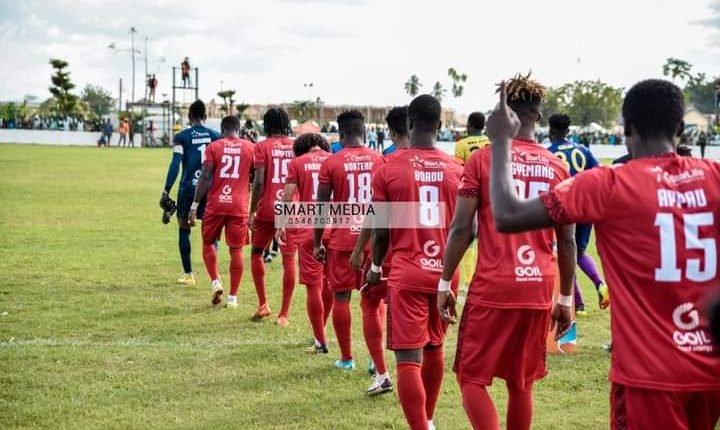 League leaders Asante Kotoko will trek to the West to play Karela United FC on Match Day Five of the Ghana Premier League at the CAM Park. The Ghanaian giants who have been the toast of town thus far have picked four wins from four matches and heads to the West to face a side they defeated 2-0 last season.

Coach Prosper Narteh-Ogum has found the key to unlock the defence of opponents with Isaac Oppong (3), Emmanuel Boateng (2), Abdul Ganiyu (1), Richmond Lamptey(1) and Mudasiru Salifu (1) finding the back of the net in the first four matches of the season.

The Porcupine Warriors have won all two away matches (Dreams FC) and (Bibiani Gold Stars) and will fight for the three points at Aiyinase on Sunday. Asante Kotoko will be without two of their influential players – Richmond Lamptey and Mudasiru Salifu due to suspension and Coach Prosper Ogum needs to find the right replacement for them.

Karela United have bagged 5 points from their first four matches of the season – with an average record of one win, two draws and one defeat. They lost 2-0 to Medeama SC in a Match Day Four contest on Monday but that came after their opening day draw against Aduana FC at home.

The Aiyinase based side have lost some key players to the foreign market while others have joined other Ghanaian Premier League sides. Last season’s top scorer Diawusie Taylor has moved to Egyptian Premier League side Future FC while former Captain Sadiq Alhassan and goalkeeper Richard Baidoo have joined Legon Cities and Hearts of Oak respectively.

They are expected to push for the points against leaders Asante Kotoko despite their unconvincing start to the new season – winning and drawing the other home match.

Karela United have a very strong record at home but that invincibility was broken by Asante Kotoko last season as the Porcupine Warriors beat them 2-0 to end a long standing home invincibility that spanned over four seasons.

This fixture will be live on StarTimes Adepa chanel 247 on Sunday, November 28, 2021 at the Crosby Awuah Memorial Park at Aiyinase