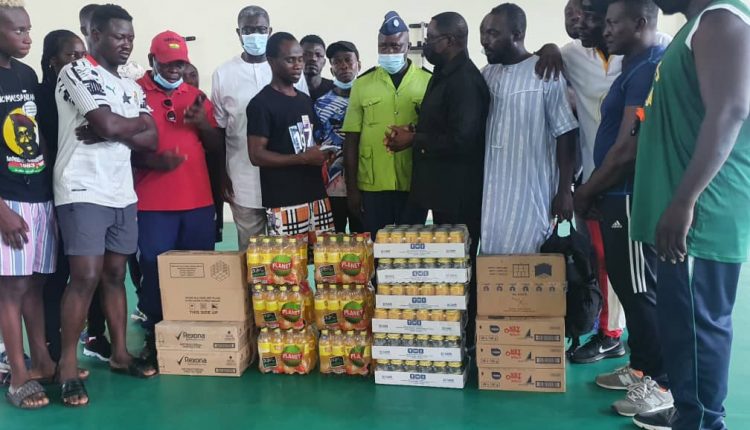 The President of the Ghana Olympic Committee, Mr. Ben Nunoo Mensah and the Chef de Mission for Tokyo 2020 Mr. Michael Aggrey on Friday morning paid a special visit to the camp of the national boxing team, the Black Bombers who are preparing for the Olympic Games at the Bukom Boxing Arena.

They were accompanied the Youth Coordinator of the GOC, Mr. Emmanuel Olla Williams, CEO of Dreamland Sports Plus.

He assured them of total support from government and the GOC, and urged them to be disciplined and sacrifice a bit to reach the medal zone at the Olympic Games which takes place from July 28 to August 8, 2021.

Mr. Ben Nunoo Mensah commended the boxers and their coaches for their persistence and comportment since they moved to the residential camp and started training at the Trust Sports Emporium.

He promised them a special package if they excel at the Games, as the GOC has contacted many companies in Ghana who are willing to come to their aid.

“You can compare yourself to any world class boxers, that is why you have qualified to the biggest sports festival, so never be afraid of any opponent, go all out and go for the ultimate” he told them.

The Chef du Mission, Mr. Michael Aggrey said the team will move to camp in Inawashiro in Japan for final preparations and intensive training as well as to acclimatize a month before the Games.
He assured them that their kits for the Games are being worked on.
The President of the Ghana Boxing Federation (GBF) Mr. George Lamptey, his vice Ahmed Samed and coach Dr. Ofori Asare thanked the GOC for the surprice visit and promised never to let the nation down.

Skipper of the Bombers, Sulemanu Tetteh who received the presents thanked the GOC President, while the female boxers in the team appealed for recognition and equal treatment for all sportsmen and women.