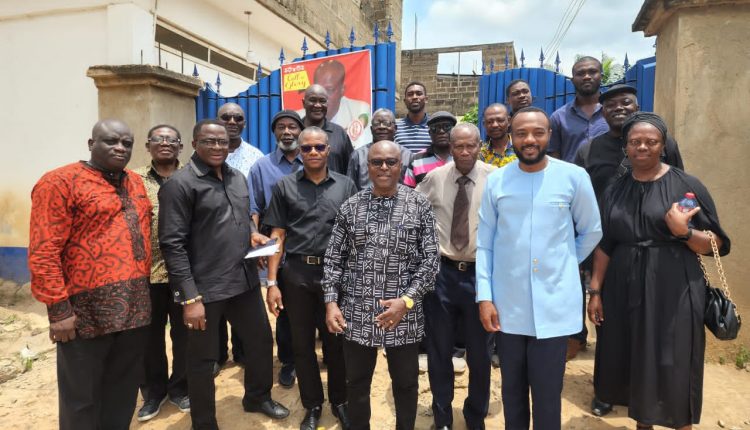 The Executive Board of the Ghana Olympic Committee (GOC) led by President Mr Ben Nunoo Mensah, have called on the family of the late 1st Vice President of the GOC/Commonwealth Games Association Mr Paul Atchoe.

Mr Ben Nunoo Mensah expressed the sadness of the entire Olympic movement in Ghana, the board and the sports fraternity as a whole.

In expressing his condolences to the family, the GOC Chief reiterated that indeed Ghana Sports has lost a giant luminary.

“Mr Atchoe was an influential national asset so on behalf of Ghana Sports I would like to express our sympathy to the family. We have lost a luminary in our sports fraternity”.

Mr Nunoo Mensah also added that the contributions and impact Mr Atchoe has left behind sp3qks volumes of the late Sports administrator.

“The legacies he left behind will forever be remembered. There is no way you will talk about volleyball without mentioning his name”.

On his part, the spokesperson for the Atchoe family Mr George Melomey expressed their profound gratitude to the GOC delegation.

“On behalf of the family, we are grateful for mourning with us in this difficult times. It is our prayers that my brother is forgiven by all if he ever offended anyone while he was alive.

The Deputy Secretary General of the Ghana Olympic Committee Mr Jerry Ahmed Shaib informed the family that there was a minute’s silence observed for the late Paul Atchoe before the Commencement of the Commonwealth games in Birmingham, United Kingdom.

Mr Nunoo Mensah in conclusion added that the doors of the GOC are always open to the family ahead of a befitting burial in honour of the late Paul Atchoe.

Family head Mr George Melomey outlined the funeral arrangements to the GOC by confirming Saturday 17th of September, 2022 as the burial date.