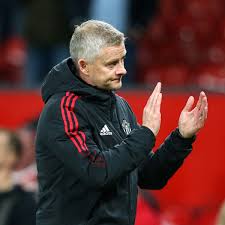 The club have won just one of their past seven Premier League matches and are seventh in the table, 12 points behind leaders Chelsea.

First-team coach Michael Carrick has been placed in temporary charge while United seek an interim manager to the end of the season.

“It is with regret that we have reached this difficult decision,” United said.

The club’s recent run of poor form includes a 5-0 thrashing by Liverpool on 24 October and a 2-0 defeat by Manchester City on 6 November.

United added: “While the past few weeks have been disappointing, they should not obscure all the work he has done over the past three years to rebuild the foundations for long-term success.

“Ole leaves with our sincerest thanks for his tireless efforts as manager and our very best wishes for the future.

“His place in the club’s history will always be secure, not just for his story as a player, but as a great man and a manager who gave us many great moments. He will forever be welcome back at Old Trafford as part of the Manchester United family.

“Michael Carrick will now take charge of the team for forthcoming games, while the club looks to appoint an interim manager to the end of the season.”

United next play when they travel to Spain to take on Villarreal in the Champions League on Tuesday, before league games against Chelsea and Arsenal.

Solskjaer, 48, replaced Jose Mourinho on an interim basis in December 2018.

The Norwegian was then given the job full-time in March 2019 on a three-year deal and, in July, signed a new deal with the club until 2024.

But with United finishing in second place in the Premier League last May – 12 points behind champions Manchester City – and losing the Europa League final to Villarreal on penalties, it was accepted that Solskjaer needed a trophy this season to stay in the job.

United are top of their Champions League group after four games, level on points with second-placed Villarreal but only two ahead of Atalanta in third.

They were beaten by Moyes’ West Ham in the third round of the Carabao Cup and have yet to start their FA Cup campaign.

After four wins and a draw in their first five Premier League games, United have been poor, claiming just four points from a possible 21.

United goalkeeper David de Gea described his side’s defeat by Watford as “embarrassing” and “another nightmare”.

“We don’t know what to do with the ball, we are conceding a lot of goals. It’s a horrible moment,” he added.

Solskjaer leaves United with a win percentage of 54.2% from 168 games across all competitions.