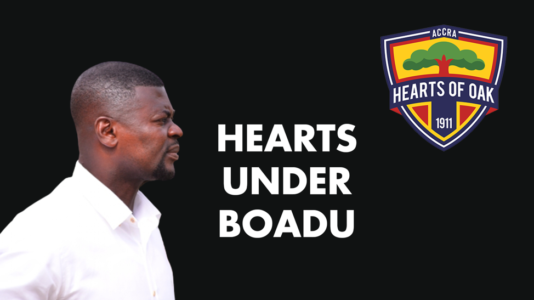 Since Samuel Boadu joined Hearts of Oak from Medeama at the halfway point of the season, the Phobians have been on fire and have not looked back since.

Even when it seemed like Asante Kotoko and Baretto had the title wrapped up, Hearts clawed back and capitalized on the Porcupine Warriors’ slump in form to steal first place.

With three games to go in the league, let us take a look at Samuel Boadu’s brilliant Hearts of Oak side.

The first thing that catches the eye in this team is the 22 goals they have scored in the league since Boadu took over; they have only failed to score in just two games out of 16.

Defensively, they have been solid and have only conceded two goals in a game just once under the former Medeama gaffer.

Their attacking structure and shape makes it easy for them to attack opponents, their defensive shape has also been formidable. Boadu likes his whole team to be disciplined off the ball.

The team love to press and target opponent players who dwell too long on the ball, creating fast transitions where Hearts get players into the box to finish chances.

System
Samuel Boadu often sets up in a 4-3-3/4-2-3-1 but as a very flexible tactician, he does not rely on one system and often alters it during games according to the opponent.

The fact that a lot of Hearts of Oak players are versatile in multiple positions makes it easier. Boadu structures his team to circulate the ball from the back, creating superiority and breaking lines with passes from deep areas to reach the midfield.

The midfield often lineup with a lone midfielder in deep areas, or sometimes a double pivot with Salifu roaming in advanced areas to provide a passing option between the lines. 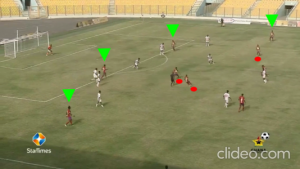 The midfield has been the key to Hearts’ form; Emmanuel Nettey, Benjamin Afutu and Salifu Ibrahim, the regulars in the center of the park. The trio are all technically skilled on the ball, making it hard for opponents to take it off them. 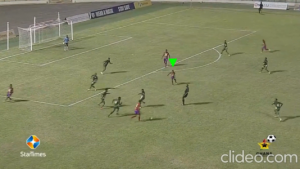 Salifu is the glue that links the midfield and the attack; during games he is often the free man, drifting across the pitch to find spaces to exploit with his amazing passing ability. The 21-year old midfielder has boosted his chances of winning the player of the season award, providing 7 assists and scoring 2 goals this season. 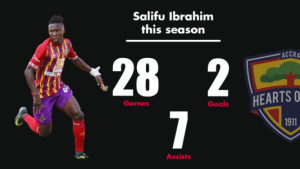 Hearts also love using cutbacks, initiated by a player making the run behind the defence, receiving the ball and playing it behind the defenders who are rushing towards goal.

This has created a lot of high quality chances for the Phobians this season. Their goal against WAFA was the best example highlighting how Boadu wants his team to set up; high and wide fullbacks, forwards providing options in the box, with Salifu moving in and around the final third seeking that killer pass.

Summary
Samuel Boadu has coached Hearts of Oak into one of the best attacking sides in the Ghana Premier League in a matter of months. Transformed a misfiring Daniel Barnieh, made Salifu Ibrahim even better than he was at Eleven Wonders and generating goals from midfield whenever the team’s attack is blunt. His combination of coaching and selecting the right combination of players every game is one of the reasons why Hearts is in pole position on top of the league. 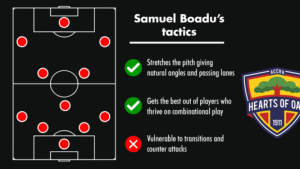 Though the weakness in his system is his high line, the team has comfortably dealt with threats in behind. With a full pre-season and a transfer window ahead of him before the new season starts, Hearts of Oak will return to the pinnacle of Ghanaian football very soon.

Ibrahim Salifu crowned player of the month for May