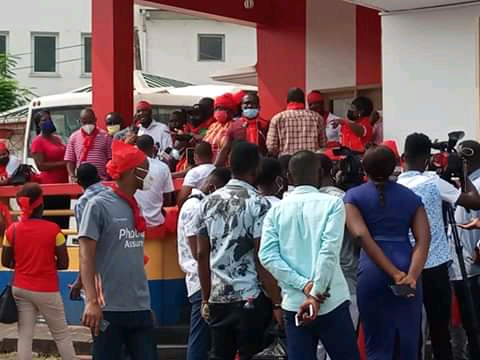 The supporters led its chairman Elvis Herman Hesse in a speech delivered at the club’s secretariat presented a 4 point resolution to the board of the club to ensure the club is repositioned.

Victorian Adebayor Reveales Why He Snubbed Hearts Of Oak For…

The Supporters are also demanding the Appointment of a new chief executive officer and a new Coach for the club.

Below is the full statement from the National Chapters Committee of the club.

DEMAND FOR A ROUNDTABLE DISCUSSION WITH BOARD OF DIRECTORS

At a meeting of the leadership and the entire supporters front of our Great Club Accra Hearts of Oak, we have come to a situation where we believe this is thw right time for the Board of Directors of the Club to offer some pertinent answers and actions to the Supporters at this crucial moment the club finds itself.

We do this inview of the fact that our dear club has had its fortunes sunk both on and off the field of play.

The Supporters are therefore demanding the following.

_Below is the resolution of the Supporters of the club_

1. The NCC on behalf of Supporters and other Organs of the club [Hearts Ladies, Ahoopa etc] is calling for the immediate reconstitution of the Club’s Board of Directors to make accommodation for stakeholders and Minority shareholders and holding of the long overdue Annual General meeting of the Club.

2. The NCC demands an emergency meeting with the majority shareholders for briefs on the current state and happenings in the Club

3.The NCC demands immediate consensus stakeholder meeting between the majority/Minority (Shareholders) on one hand, and other key organs of the Club in order to Foster lasting Unity for the Club.

4. The NCC demands an immediate appointment of a CEO/First Team [Local] Coach and this must be done in consultation with all stakeholders of the Club to energize support base of the Club.

cc: Board of Directors
All Media Houses
Stakeholders

Victorian Adebayor Reveales Why He Snubbed Hearts Of…