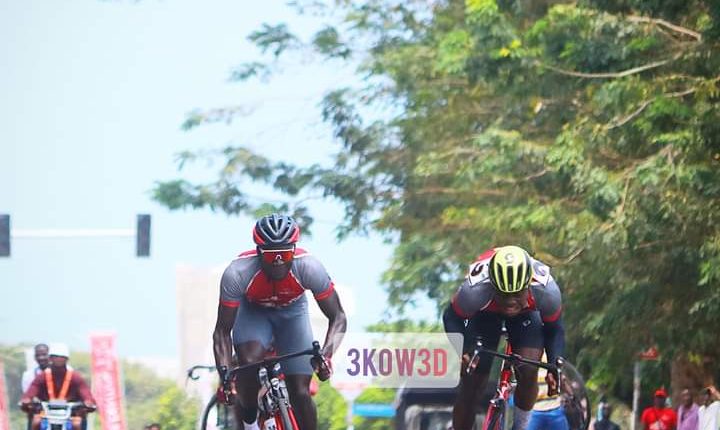 Lead Sponsors Prudential Life Insurance in collaboration with carbon AV, official organizers of this year’s PruRide Cycling Race, and the Ghana Cycling Federation, added more bite, colour and Life to the Cycling Sport with an excellent organization yesterday at the Independence Square Accra.

But the main event was the target of Gh15,000 as final prize for the winner of a criterium clearance of 99.7km embracing 19laps. 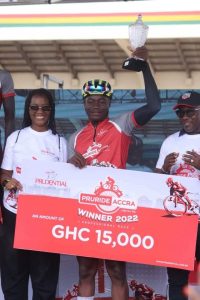 Lawrence Adjei of Gladiators Cycling club ozzed in sweat past fellow nemesis Anthony Boakye DANKWA BOAFO of River Park Brong Ahafo to the finish line in micro seconds to have a first bite of the cherry.

The race:
73 registered professional cyclists began the loop onslaught around the Accra sports stadium covering a distance of 99.7. An incredible average speed of 40.55km/hr was recorded with total race time of 2hrs ,28mins,08 seconds in that gruelling 19lap assignment. 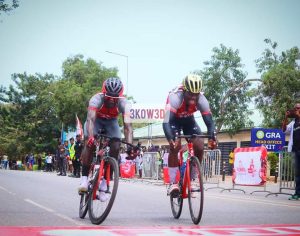 The first lap was very normal. But the normal rivalry between the clubs was evident. But of course all attention was on current number one wheeler Anthony Boakye of River Park Brong Ahafo. He led the initial peloton until the third lap when matters changed.

Interestingly, some legs had began dozing off after the fourth lap and by the fight loop there had been a break away of five riders with Lawrence Adjei, Anthony Boakye,Frank Akuffo and commanding the relay.

All attention now centered on the trio- Adjei, Boakye and Akuffo. Yet the respect in the breakaway relay work was commendable as all cyclist offered to work in the 5 man breakaway bunch.

By the 10th lap it was visible Lawrence Adjei would be a huge threat. His consistency and cadence level was exactly in equation to that of Boakye. Lawrence showed no sign of fatigue and that was where the crowd noticed something would happen.

The camera and focus on the five breakaway riders stole all attention on the day and the cut away peloton was no news now. Interestingly the upcoming young boys like Julian Fiase of TBT Cycling club, Joseph Nii Quaye of Club Sky, Benjamin Boahen of River Park Sunyani, Ebenezer Quaye of All Stars Cycling club and River Park Accra’s Emmanuel Otukornor Sackey were all domiciled in the second bunch.

The heat kept on till somewhere in the 15th lap and yet still it was difficult to tell who would emerge winner out of that heat in the breakaway bunch. The speed rate was unpredictable. And by now the two babies in the midst of Adjei, Boakye and Akuffo had been disintegrated. No where to be found.

The crowd around the finish line all began throwing their flammable support for Gladiators drafter Lawrence Adjei. The Gladiators Cycling club wheeler was becoming a thorn in the flesh for Anthony.

When the final lap was signalled by “30laps” the man whose job was to tell the number of laps, the battleline had already been drawn for the final frenetic finish.

One more lap to go. And Frank Akuffo had been torn off by the speeding duo- Adjei and Boakye. Many riders had already retired and relaxing around the Access Bank area.

By the time Lawrence Adjei and Anthony Boakye had snaked around the Access Bank area for the final finish sprint, they had began to size up themselves, locating a space to sprint off. Boakye was Infront. Lawrence Adjei followed suit closely. It was about some 30 km to clear the Prudential decorated finish strips on the ground. The crowd chanted in slogans.

The Gladiators Cycling club sprinter endoed on his bike and flung himself up past Anthony Boakye, squeezing past the finish line in an iota of a micro second to win the race in a shared time of 2hrs,27mins,32secs.

Anthony Boakye placing second with same time build up with old foe Frank Akuffo Awuku of Team Boss Tribe coming through the third spot in a time of 2:27:42. 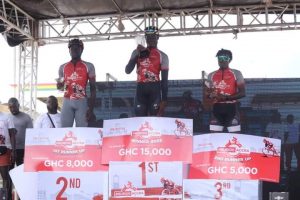 That was a brutal finish to be remembered in a lifetime for the Sport in years to come. A replica finish was when former mountaineer and Ghana’s finest Henry Tetteh Djangmah bled to finish in 2011 during the cowbell Tour Du Ghana where victor Cudjoe gave him a chase of his life.

This year’s PruRide Elite Cycling Race was preceded with the Cycling for all race encompassing over 100 participants. 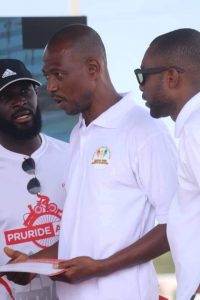 The Federation is extremely elated with the influx of such huge entities like Prudential Life, Carbon AV, Gladiators etc who are interested in developing the Sport.

The next swashbuckling one day criterium to be organized by the Gladiators Cycling club will roll on the 21st of September,2022 around the Accra sports stadium and that promises to be an absolute “banger”!!