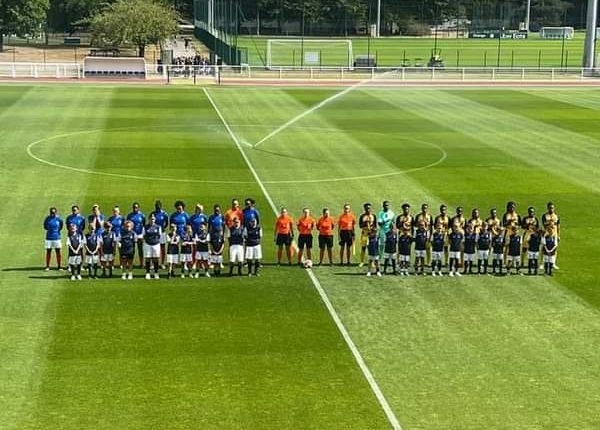 The Black Princesses of Ghana suffered a humiliating friendly defeat to France’s U-20 female team in a pre-World Cup test game at the Complexe Sportif a Clairefontaire-en Yvelines in France on Friday afternoon.

The six-time world cup finalist was outclassed and outplayed in the friendly game aimed at preparing them for the World Cup.

A first-half brace from 18-year-old Vicki Becko and a second-half goal each from Esther Mbakem-Niaro and Laurina Fazer ensured the Les Bleuets completed a resounding 3-0 against the Ghanaian side.

The Black Princesses having commenced the game on a brighter note saw their French counterparts taking over, controlling and dominating possession. Halfway through Reims 18-year-old forward Vicki Becko scored two quick goals within seven minutes in the 15th and 22nd minutes.

The goals awoke Coach Ben Fokuo’s side but it was a little too late to stage a first-half fightback as the game ended 2-0 in France’s favor after the first 45 minutes.

However, the Les Bleuets of France were rampant after the break, forcing the Black Princesses to commit some errors, and with just three minutes into play, Esther Mbakem-Niaro added the third in the 48th minute.

Laurina Fazer completed the demolishing exercise for France with the fourth goal in the 75th minute to deepen the woes of the Black Princess via a penalty spot.

The Ghanaian ladies fought for a consolation but the defense of the French side denied them any goal as the game was 4-0 in France’s favor.

Coach Ben Fokuo and his ladies will continue to hold their training sessions in France before departing the country to Costa Rica for the 2022 FIFA Women’s U20 Women’s World Cup.

The 16 teams tournament which is the 10th edition is scheduled for August 10-August 28 to be hosted in two cities.

EDUCATION: Embossment Of Otumfuo’s Image Of Asante Kotoko 2022/23 Jerseys…. What Does The FIFA Law Says?

Ghana on the brink of FIFA U20 Women’s World Cup…