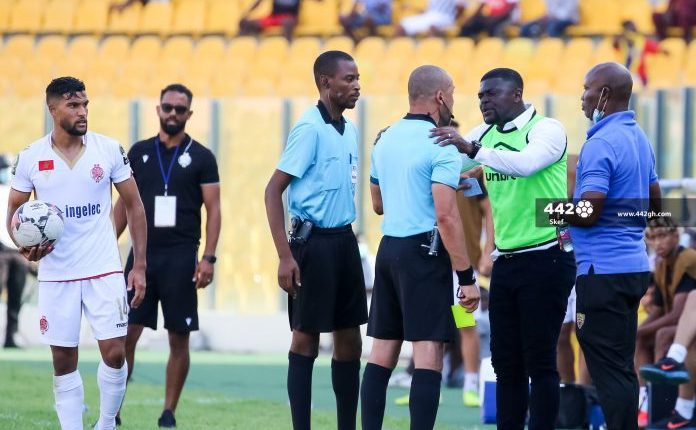 Hearts of Oak head coach Samuel Boadu has bemoaned the officiating in their win over Wydad Casablanca in the CAF Champions League at the Accra Sports Stadium on Sunday.

The Phobians secured a 1-0 win, but are utterly disappointed with the performance of Angolan referee Helder Martins Rodrigues De Carvalho.

The official mostly ruled against the Phobians on 50-50 balls in the second half.

Boadu picked up a Yellow Card during the game when he confronted the center referee.

Hearts’ fans hooted at the referee as he made his way into the dressing room after the final whistle.

The return leg is on Sunday, October 24, and while Boadu is confident of a favourable result, he has demanded good refereeing in Casablanca.

“It is going to be game management when we go to Morocco. If we get good officiating, Hearts of Oak can score over there,” he said at the post-match conference.

“Everybody saw the performance of the referee and if we get good officiating in Morocco, Hearts of Oak will win.

“Hearts of Oak has good players to compete with WAC of Morocco. We are okay with the one goal we scored. We shouldn’t give up and we are going to qualify over there,” he added.

The winner of the play-offs tie will qualify for the group phase.