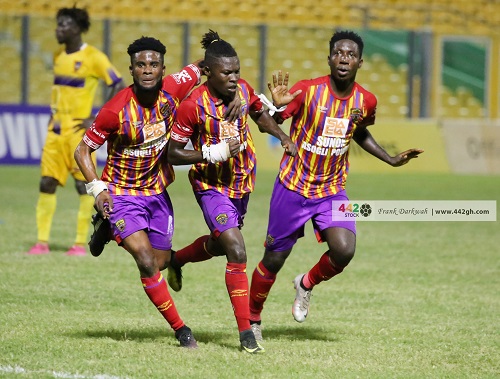 Hearts of Oak has taken a commanding lead towards reclaiming its lost glory that has seen them not win the domestic top title well over 10 years.

The former CAF Supercup Champions defeating Medeama SC by 2 goals in both halves from Ibrahim Salifu and Benjamin Afutu Kotei.

Medeama coach paraded a strong lineup – hoping he could snatch the maximum points at the Accra Sports Stadium in matchweek 29 fixture.

Hearts of Oak dominated play and needed 41 minutes to break the deadlock through Ibrahim Salifu who pounced on poor defending from the Medeama 18-yard to beat goalkeeper Frank Boateng.

The goal disorganized Medeaama, who threw more players up play to get a quick equalizer, but the defence of Hearts stood firm with Robert Addo Sowah, and Mohammed Alhassan controlling affairs.

After the break, Benjamin Afutu Kotei scored the second and the final goal of the game in the 61st-minute.

That was all the major action spot of the game as Medeama returned to the second half looking more organized in defence and midfield.

But Samuel Boadu had different ideas, improving his midfield with Caleb Amankwah and Umar Manaf.

Hearts of Oak are now 53 points with 5 games to end the season with Asante Kotoko yet to play.