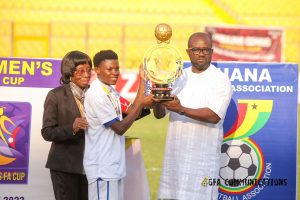 This is the second meeting in two weeks for both teams after Ampem Darkoa secured the Women’s Premier League title over Hasaacas Ladies via a penalty shoot-out.

Comfort Yeboah’s penalty early in the first half (18 minutes) made the difference as the Techiman-based club clinched their second trophy this season while doing the double over Hasaacas Ladies.

Despite creating a couple of chances in both halves, last year’s Champions, Hasaacas Ladies were unable to mount a comeback in the game.

Ampem Darkoa Ladies have already secured their spot in the WAFU B qualifiers for next season’s CAF Champions League.