On this day 30 November 1997 (Exactly 25 years today) Shamo Quaye died in a mysterious manner in Ghana after returning from his base in Sweden.

He passed away while playing a fun match in Tema, 25 km east of Accra. It was reported that he was hit in the face by a ball during the game and died after being rushed to the hospital.

Shamo Quaye was part of the famous Accra Hearts of Oak musical youth, promoted to the first team of the Phobians in the late 1980’s by Dr. Nyaho Nyaho Tamakloe, following the sacking of majority of the senior team players of the club at the time.

Injury Blow: Hearts of Oak Stalwart Defender is Ruled Out…

He would inspire Hearts of Oak to a league and FA Cup double in 1990.

Shamo Quaye represented Ghana in the 1992 Olympics staged in Barcelona. Ghana made history as the first African country to win a medal in football at the Olympics- bronze medal.

Quaye was one of the two players who epitomized domestic football in the early 1990’s in Ghana. His ability to entertain fans with his goals and runs drove several football loving fans to the various stadia.

Shamo Quaye and Joe Debrah of Kotoko dominated the headlines as the debate as to who was the finest player at the time was endless.

He earned a lucrative deal to join Umea of Sweden from Accra Hearts of Oak in 1995.

The 1996/97 Domestic football season in Sweden had just ended and Quaye had returned to Ghana for the holidays. Catching up with old friends for a ‘fun’ match, Quaye suffered a freak on – pitch accident that would end his 26-year – old life.

However, the whole nation was thrown into a state of mourning when the mercurial striker passed away in a mysterious manner on the field.

As the well – told story goes, the ball struck Quaye’s face/head, triggering a series of complications that, somehow, culminated in the death which occurred on November 30, 1997.

While the above is logical explanation to Quaye’s death, it isn’t the only story that made the rounds at the time; the other would have you scratching your head in disbelief.

Barthomomaus Grill, the Africa correspondent for Germany weekly newspaper Die Zeit, tells this way: “When Shamo Quaye, who was playing professionally in Sweden, came home to Ghana to collect debts from his old team (Hearts), he was bitten by a poisonous snake while at supper (in his own home). He died on the way to hospital. The whole country had only one explanation. “Juju, black majic.”

Weird, yet that seems the more circulated version of how Quaye died. As Grill points out, it is what the majority chose – and still choose – to believe. 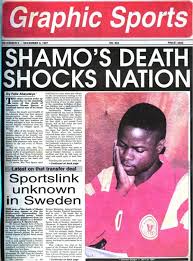 We’ll fight to get our revenge against Uruguay – Mohammed Salisu