Today In Sports History: Hearts of Oak come from behind to beat Esperance 2-1 in Africa Champions League 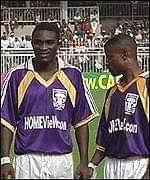 On this day 2 December 2000 (Exactly 21 years ago today) Ghana’s Hearts of Oak withstood a furious first-half onslaught and a sending off 25 minutes from time for an upset 2-1 away win over Esperance of Tunisia in the first leg of the African Champions League final.

Hearts’ goalkeeper Sammy Adjei made a sequence of brilliant saves to keep the half-time deficit down to just one goal and the Ghanaians then turned the game on its head with two breakaway goals to silence the vocal home support.

Esperance ran rampant in the first half with Ali Zitouni missing a succession of gilt-edged chances and Adjei made several superb stops.

But it was only a matter of time before the hosts found the net with Zitouni slamming home from close range after Hassen Gabsi had laid the ball back into his path. But Hearts brought a sudden stop to the attack just seven minutes after the interval when 18-year-old Ismael Addo sprinted away to equalise.

Mauritian referee Lim Kee Chong red-carded Hearts defender Yaw Amankwah Mireku in the 65th minute for retaliation after he had been initially elbowed in the face.

But Esperance failed to take advantage of the extra man and were caught 11 minutes from time when substitute Emmanuel Adjogu set up the winner for Emmanuel Osei Kuffour.

Esperance were the first club to get a grand slam of African club titles, winning the Champions League, the African Cup Winners’ Cup and the CAF Cup in the space of four years between 1994 and 1998. They were also runners-up in the previous year’s Champions League final, denied another title only in a post-match penalty shootout by Raja Casablanca of Morocco.

Such hadld been their home dominance that Esperance had scored 100 goals more than the 20 conceded in all their African club competition matches at the El Menzah stadium.

Five of their players in the match against Hearts had won medals in two previous finals and veteran goalkeeper Chokri El Ouaer, midfielders Sirajeddine Chihi and Hassan Gabsi and wingback Tarek Thabet had four winners’ medals.

But apart from Gabsi there was little evidence of the overwhelming dominance wich the ageing group of Esperance players have enjoyed in Africa in recent years. Instead a tired-looking team ran out of ideas against their youthful opponents from Ghana