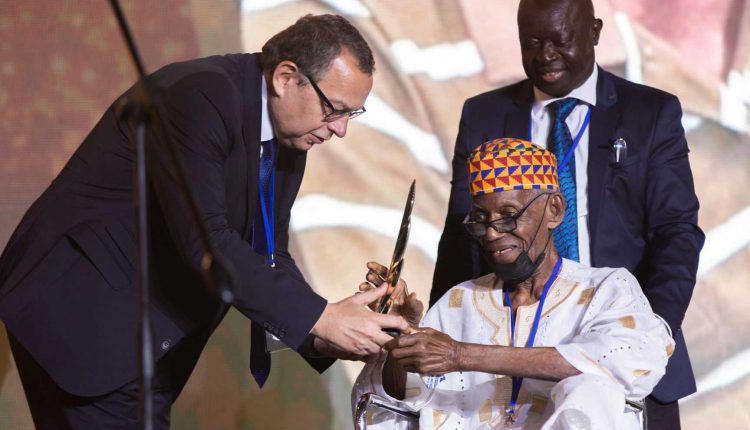 The International Sports Press Association (AIPS) crowned the 2022 edition of the AIPS Media Awards by honouring Sports Writers Association of Ghana’s (SWAG) first President, Mr Joachim Awuley Lartey, who is also known as “Over to you Joe Lartey”.

Joe Lartey as he is affectionately called in the sports media circles was present in Doha, Qatar to receive his honour in the company of current president, Kwabena Yeboah and Secretary General, Charles Osei Asibey.

Joe Lartey, who turned 95 years on June 6 was full of emotions as he was being decorated by AIPS President Gianni Merlo in a colorful ceremony at the Khalifa International Stadium, one of the host stadia for the 2022 FIFA World Cup.

In response to the honour done him, Joe Lartey reiterated his relationship with AIPS dating back to 1971 and praised AIPS for such a recognition at his age. He confirmed and praised SWAG for the rapid growth and development of the sports journalists.

SWAG’s first president started his education at Accra Royal School and before moving to Tamale with his parents. In 1938, he returned to Accra and was enrolled in Government Senior Boys School in Kinbu. After completing his middle education in 1943, he got admission into Accra Academy in 1944.

In 1961, he joined the Ghana Broadcasting Cooperation (GBC) after a recommendation from Boso Kpohonu, an old mate of his in Accra Academy.

Moved from the Talks and Features Department to the Sports Department, Joe Lartey would later write the script of professional sports journalism fused with a politics. He flourished as a football commentator and brewed a partnership and friendship with Festus Addae who would make the phrase “Over To You Joe Lartey” become popular.

Joe Lartey was the Chief commentator of Ghana’s first Africa Cup of Nations in 1963 and the second in 1965 and a countless number of matches in the Ghana Premier League. After over a decade, he joined Radio Nigeria where he stayed until 1990.

With his iconic voice and descriptive tone of events, the Ghanaian sports journalism fraternity was redefined courtesy of his professionalism. Many Ghanaian football commentators today cannot talk about the game without paying tribute to the 95-year-old.
Joe Lartey who still enjoys his popularity says “good name is better than riches”.