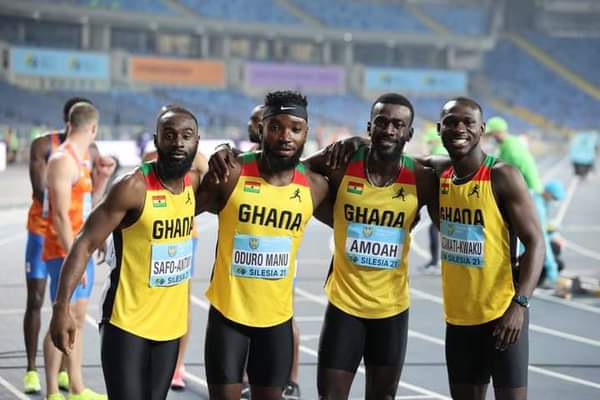 The Minister for Youth and Sports Hon. Mustapha Ussif, has congratulated Ghana’s 4X100m Men’s Relay team for Qualifying for the Tokyo Olympics.

Ghana’s 4x100m Men’s Relay team have booked their place at this summer’s Olympic Games after they finished second in Heat 1 to make to the final of the World Relay championships currently ongoing in Poland.

The team, comprising Sean Safo-Antwi, Benjamin Azamati, Joseph Manu and Joseph Paul Amoah, put up a spirited performance to cross the finish line in 38.79s, same time as first placed Netherlands, who win by 8000th of a second.

The final berth means the quartet have qualified for this summer Olympic Games scheduled to take place in Tokyo in July this year.

Ghana’s team comprised three of the four men who won gold at the 2019 Africa Games in Rabat, with the only change being the curve runner in Martin Owusu-Antwi, who place was taken by Coppin State University’s Joseph Manu.

Running in Lane 7, Safo-Antwi set the team on its way with a strong first leg and National Record holder Azamati absolutely destroyed the back straight, just like he did in Rabat. Manu held his own around the bend before handing over to Paul Amoah, who was behind the Dutch by at least 15m.

But he showed the top end speed that has revered him to many athletics fans to catch up with his Dutch compatriot right on the line. Both finished with the same time but Ghana were adjudged to be second by 8000th or a second, or the size of a needle thread.

The sports Minister took to his Facebook page to congratulate the 4X100 Relay team for their qualification.

“Congratulations to Ghana’s 4X100 relay team for qualifying for the Tokyo Olympics.

You have reposed the confidence Ghana Athletics Association, the National Sports Authority Ghana, and the Ministry of Youth & Sports-GH had in you.

We will continue to support you and Team Ghana for the ultimate in Tokyo”.