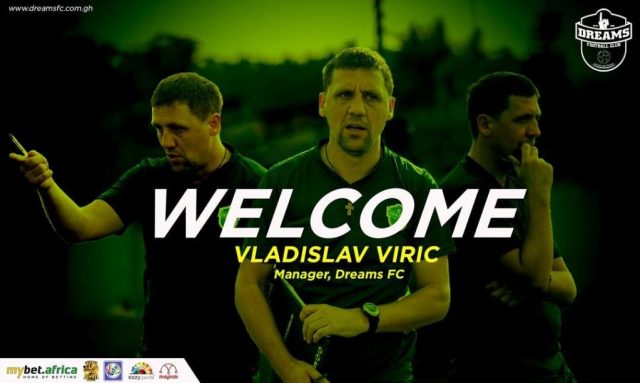 The Serbian International who is a UEFA License A holder will replace Karim Zito who will continue to serve as the Technical Director of the club.

IMAGES: Dreams FC Unveil New 48- Seater Bus Ahead Of The…

Hearts of Oak, Kotoko and Two Other clubs In Hot Chase For…

The 44-year-old who assumed work almost immediately will begin life in Dawu as he leads the club to play Ebusua Dwarfs in their week eight fixture on Sunday.

Viric who will be having his second stint in Ghana spoke on his relationship with the club and what he hopes to achieve -“I met the owners of Dreams FC during my stay here with Vision FC, we built a great relationship which I am hoping to continue. Dreams FC is a Premier League Club and I know it comes with extra responsibility but I promise to deliver”.

Speaking on the current form of the Still Believe lads and how tough his job will be; the manager admitted that the team has enough quality but has a problem with scoring and believes it can be solved. “Dreams FC has a lot of quality players but the results aren’t reflecting the quality of football we play. “Football is about goals and we have to play for goals”, we will play for every point and make sure we improve as a team to achieve the club’s goals.”

Born in Serbia, the former footballer has worked in elite clubs around the world including Valencia FC in Spain.

King Faisal Open Talks With Hearts Of Oak Over Kwame…

Hearts of Oak, Kotoko and Two Other clubs In Hot Chase…