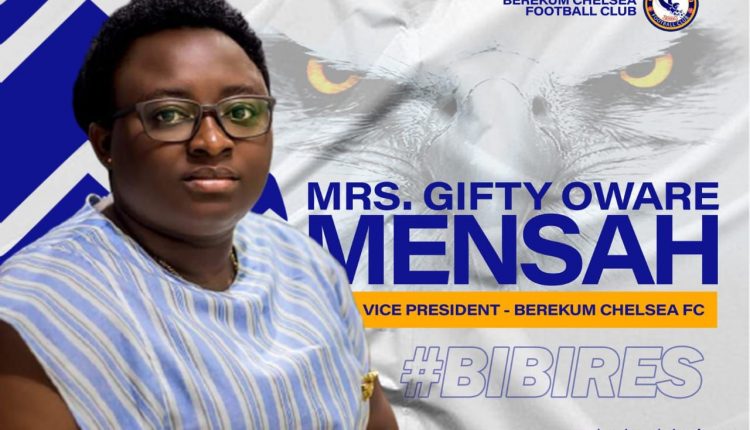 At the event present were sporting representatives from the Club led by the coaches and captains of the professional teams. Also present were members of the Club’s sporting staff such as director, technical team and others.

Just-In: Hearts of Oak complete the signing of Chelsea…

Mrs. Gifty Oware-Mensah has been part of the board for years now and has been a key driver of the Cats success over the past few years.

Speaking after her appointment, Mrs Gifty Oware-Mensah said, “Serving the Berekum Chelsea Fc over the past few years as has been a huge honour, and I look forward to continuing with this work while moving into the role of vice president.”

This appointment was very important to the club as the club seeks to build a reputable brand and become a leading name in football on the African continent.

Mrs. Gifty Oware-Mensah is expected to bring on board her vast knowledge in Football on the Local and International scene to make the Berekum Chelsea Football Club an enviable brand in Ghana Football.

With her vast knowledge in Policy Formulation, Branding, Digital Communication and Management, Gifty and the entire team has to curate a new face for the club.

Gifty is currently a member of the Ghana Football Association’s management committee for the Black Maidens (Under -17 Female football Level). She was then appointed as the vice-chairperson for the Women’s Premier League Super Cup’s Local Organizing Committee (LOC).

It can also be recalled that the daring female entrepreneur , Mrs. Gifty Oware-Mensah was named along side Evelyn Nsiah-Asare (HasaacasLadies) and George Okoe Lamptey (Ghana Boxing Federation) in the Administrator of the Year Category. Prior to this nomination, it can be recalled again that Dr. Gifty Oware-Aboagye of Berry Ladies has given true definition to ‘modern day’ football club management with only 1 year and few months in the Ghanaian women league. She has transformed the outlook of the side promoting women football brand resourcing. This year, Berry Ladies have received three nominations in the 2021 National Football Awards and has been nominated for how she has been steering the affairs of the Berry Ladies, making it a model club for female soccer clubs in the country.

Just-In: Hearts of Oak complete the signing of Chelsea…