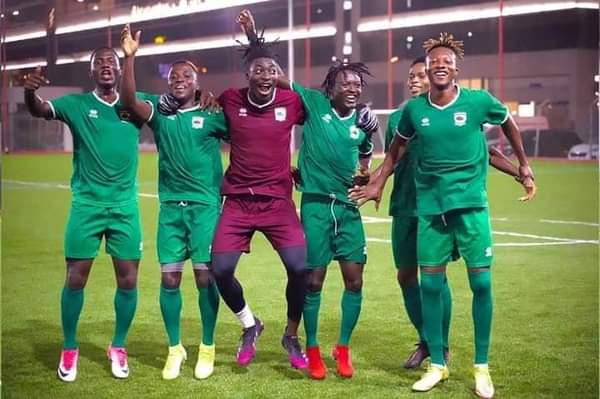 Asante Kotoko have been handed a massive boost as their newly-signed Cameroonian strikers have jetted off for the club’s preseason tour in Dubai.

Cameroonian duo George Mfegue Omgba and Mbella Etouga Franck left the shores of their native country on Saturday evening to United Arab Emirates (UAE) for Asante Kotoko preseason ahead of their 2021/22 season campaign.

The two players were acquired by the Porcupine Warriors to strengthen their upfront after failing to sign Ugandan international Steven Mukwala on transfer deadline day.

Mfegue and Mbella signed three-year deal each with the two-time CAF Champions League title holders and will be commencing training with the club next week in Dubai.

Mfegue is joining the Ghanaian giants from Avion Academy where he has been skipper and the club’s top scorer in the last three seasons.

He ended the Cameroon Elite championship last season as second highest scoring player having netted 10 goals in the end.

Mfegue masterminded Avion’s promotion to the top-flight in 2018 as one of the club’s main attacking options.

With Mbella Etouga, he bagged in eight goals and nine assist in 21 games last season for AS Fortuna.

He was a member the Cameroon U20 team that reached the quarter-final stage of the CAF U20 Africa Cup of Nations staged in Mauritania earlier this year.

Asante Kotoko will commence their 2021/22 Ghana Premier League season campaign with a trip to Dawu to battle out Dreams FC in the match-day one.