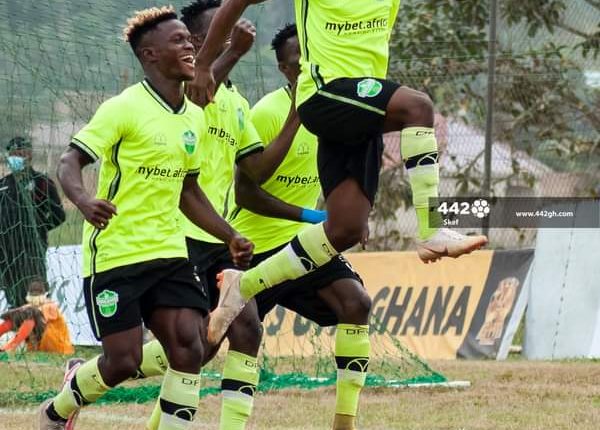 Dreams FC put up a fine display to edge AshantiGold SC 4-1 on match day 16 of the Ghana Premier League at the theatre of Dreams, Dawu Thursday.

Summer signing Joseph Esso scored his first hat-trick of the season before Agyenim Boateng added the fourth to complete the rout. David Abagna scored the consolation goal for the former champions.

Dreams FC took the lead through a spot kick as early as the 7th minute. Joseph Esso put the Still Believe lads firmly in control of the game with two nippy goals in 8 second half minutes to put the game to bed at Dawu.

Esso doubled the lead in the 50th minute and then completed his hat-trick three minutes later.

Premier League winner David Abagna pulled one back for AshantiGold in the 87th minute to reduce the deficit.

With a possible comeback in sight, Agyenim Boateng put the nail in the coffin to restore the three-goal advantage in the 90th minute, landing a free kick straight into the top left corner.

The 4-1 thumping brings Dreams FC back on winning ways after losing 1-0 to Berekum Chelsea to end their unbeaten run-on Sunday.

Dreams FC have now moved to second place in the standings with 26 points. AshantiGold are 11th with 21 points.