IF YOU DON’T SCORE…Video Of CK Akonnor Threatening Kwame Opoku In S. Africa Game Surfaces On The Internet 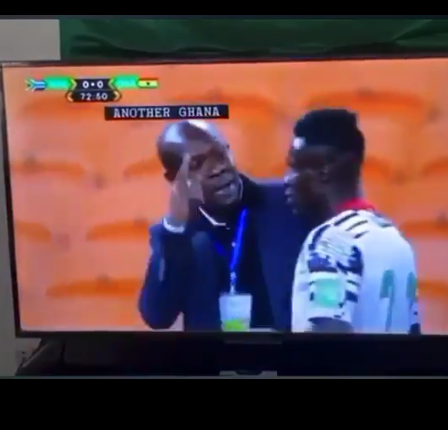 Following a basketful of criticism slammed against the head coach of the senior men’s national team, Black Stars, Charles Kwabla Akonnor on the back of a dismal output against South Africa in the recent 2022 World Cup qualifiers the former Kotoko gaffer has found himself in fresh trouble.

A video of CK Akonnor virtually threatening USM Algiers center forward Kwame Opoku in the game against Bafana Bafana to score a goal, less face the consequences has surfaced on the internet.

Ghana Ranked 53rd In The World, SEVENTH In Africa In Latest…

Although the video is without a proper audio, lip reading experts have intimated the underfire trainer literally spilled the threat or caution in the local dialect (Twi) to Kwame Opoku who replaced skipper Dede Ayew as Ghana suffered their maiden defeat to South Africa in a competitive fixture since 2000.

Since Monday, there has been a widespread public backlash on the spiritless display by the Black Stars under the coaching tutelage of CK Akonnor with a mighty majority calling for his head.

His tactical competence, player selection and seeming lack of proper style of play has been fingered by his critics and the latest footage could arm his detractors with more reasons to intensify their call for Akonnor’s exit.

Ghana will face the Warriors of Zimbabwe in the next qualifying fixtures next month as the four-time African champions seek to return to winning ways after the South African slip.

Below is the footage of CK Akonnor threatening Kwame Opoku to score or face the consequences thereafter:

What do you make of the video?

Ghana Ranked 53rd In The World, SEVENTH In Africa In…